by Alex Gabbard in the October 1995 RootesReview

The question has been raised concerning what wheels were used on the Tiger through factory or dealer options. At the expense of rehashing some of what is general knowledge of some people, the following is as complete as I have been able to put together and has been gathered with the help of Tiger owners all over the United States.

So far as I have been able to determine, all Tigers came to the United States from the factory with the standard 13-inch, slotted steel wheels and were fitted with small chrome hubcaps and beauty rings at the dealer’s. Photo #1 illustrates a stock setup, as applied to a Mk II Tiger (note the body stripes and wheel well moulding). I’m told by some sources that early Tigers were fitted with different beauty rings, perhaps non-slotted ones like the Mk IV Alpine. Looking back through my photos covering several years of Sunbeam events, I was surprised to see that only two of the Tigers I’ve photographed have original wheels and trim. If these items have been discarded, chances are that in the years to come they will become quite sought after by the purists. So if you’ve got them, hang onto them, because many Tigers may become showroom restorations.

For dealer-installed or depot-installed options, the first version of the cast alloy type wheel was the LAT-9. Called the “Pie-Mag” in some quarters, this wheel was offered as a competition item since the stock steel wheels could not take competition punishment or cool the brakes as well as the aluminum alloy optional wheels. The outside surfaces of the wheel were of a machined (not highly polished) finish. The center portions of the “pie” wedges were painted black, although some now carry different colors. Photo #2 illustrates the LAT-9 wheel, which is 13-inch and made of cast alloy. The center hubcap is also cast, machined and painted so that the Tiger logo is visible. I’m told that the center opening of the hub is so small that these wheels won’t fit most types of automatic tire changing machines (which might ruin the wheel if it did fit), so that flats are changed by hand.

The second version cast alloy wheel was the LAT-70, also 13-inch, which is a polished aluminum alloy usually regarded as a custom rather than competition wheel. However, they are extensively used on some cars in autocrossing, so they must be tough. The companions to these wheels are the LAT-75 spinner, also polished alloy. The center applique of the spinner carries the Tiger logo in a different form from the LAT-9. Photo #3 shows the LAT-70 and LAT-75 options.

Of the two types of optional wheels offered as recognized available options, the LAT-9 and LAT-70, there is some controversy as to which is generally more valuable. In my judgment, the LAT-9 should be considered more desirable, since it is far rarer and has not been available for years, whereas the LAT-70 is still available. However, the LAT-75 spinner is not. I’ve heard of sets of both types of wheels being bought for ridiculously low prices, so they’re out there. Both types of wheels certainly add significantly to the looks and value of the Tiger and are sure to become very expensive. 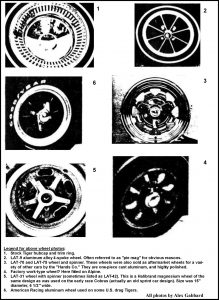 For full competition Tigers, or if you had the bucks to have your car so fitted, the suspension carried all sorts of trick items that are now top dollar prizes. Like 4-wheel disc brakes and splined hubs for the LAT-31 Halibrand wide-rim cast magnesium wheels with knockoffs, shown in photo #4. These are the same as the FIA Cobra wheels and intended for the same purpose-racing. Two factory-backed competition Tigers are known to exist that are fitted with these wheels. Other than that, I know of no others. They are listed on the Tiger homologation statements as available options, but very few sets seem to have been used. For the gutsy guy looking for the trick setup, 4-wheel discs and the LAT-31 wheels have got to be it.

Another type of factory-installed competition wheel that was not advertised as an available option but was fitted to works Alpines and Tigers, and are rather unusual, are shown in photo #5. These are cast alloy wheels with a bolted-on center section of steel. They fit onto splines and are retained by the spinner. The photo is the only set I’ve ever seen.

Published photos of some early European rally Tigers show them to be fitted with what appears to be Mini-lites. They are among the best looking aftermarket items available and must have been judged by the Rootes Group Competition Department and Norman Garrad to be worthy of the job of competition.

Some other early Tigers raced in the United States had the eight-spoke American Mag shown in photo #6. The center section was usually painted black and did not have the spinner, which appears to be for looks and on backwards in rotation. Compare to photo #5. The Gordon Chittenden IHRA world-class record holder Tiger and other drag Tigers were fitted with this type wheel. In the case of the LeMans Tigers, they were fitted with 15-inch pin-drive alloy wheels and knockoffs. There were three of these Tigers built and each was fitted with these gorgeous wheels (photo #7), and no one knows their origin. Neither have I found anyone who has seen them used elsewhere.

To sum up, only the LAT-9, LAT-31 and LAT-70 were offered through the Sunbeam network as optional wheels. The factory team cars apparently used Mini-Lites and wheels as in photo #4. Perhaps there were other types of wheels or variations of those shown here, but I’ve been able to find no others that have factory connections. Does anybody know more about the LeMans Tiger wheels?

The late Dick Barker, owner of one of the Le Mans cars for about 20 years, told me the wheels were made by Dunlop and were magnesium. He actually had the wheels reverse engineered and reproduced a couple of sets in Aluminum as the originals had acquired numerous stress cracks and had reached the “pure ornamental” point. Both thr original wheels and the beautiful reproductions were sold with his car shortly before his passing.