by Larry Paulick in the April 2001 RootesReview:

In 1973, I sold my 1965 Tiger from Pittsburgh, with rust included, to a 16-year-old kid and two weeks later I purchased another 1965 Tiger. The rusting hulk (see photo) sat until 1996. In the interim, my wife almost had it towed away several times, but luckily no one would take it.

The car was complete with lots of options and looked fairly good, with a bad paint job and what was supposed to be a 289 HiPo engine. At least this is what I thought. I started the restoration during 1996, stripping the car to its shell, and the story started to unfold like a bad dream. There was more rust and body damage than I could have realized. I knew I had to have a plan or scrap the project. 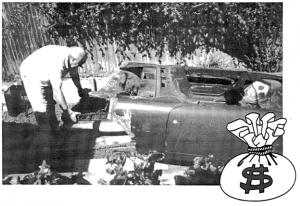 The first thing was a budget, for purchasing new rubber parts and interior, new chrome or repro parts, and a windshield. The budget also had to include stripping the car to bare metal, rebuilding the suspension, a list of the mods that I wanted and, of course, the body work and painting. The replacement parts came from Classic Sunbeam and Sunbeam Specialities catalogs. Lesson number one: Put a real list of parts and costs together and don’t kid yourself now, only to be horrified later on.

With all the horror stories on restoration, I talked to other restorers, and visited body shops within a 75-mile radius (I wanted to look in on the car as the work progressed). I talked to 10 shops, looked at their work and talked to some of their previous clients.

Most of the shops wanted to charge by the hour, with no time limit. No way! I found several shops that would give an estimate on time and costs. I liked one shop, got excellent recommendations from other customers, and I wrote a contract, listing the items and quality of work expected, time and dollars. I included a series of pictures of the bare car to show the work that was required. I went over the pictures, the car, the price, and quality of work expected. We both agreed and we signed a contract.

After seven months, they did an excellent job, just what I wanted. Near the end I asked for and paid for extra work based on the quality that had been done to date.

It is important to remember that a body shop is in business to make money. If you aren’t fair with them, they won’t be fair to you. I gave them a car, media blasted and primed, paid 20 percent down and made progress payments (which I suggested even before the shop asked). When you see all those other cars just sitting there, you will understand why this is important. That’s lesson number two: Work with the shop, pay them, don’t be cheap, be fair, and if something is not right, correct it right now or you will see the quality of work slide again and again.

Along the way, we found some work that was very time consuming. With my donor Alpine, we saved time and money. There were some panels that really would take too much time to fabricate from new metal, and I paid for the new panels. It cost about $500, but the good will and final results made it worthwhile. Lesson number three: Be flexible, and it will eventually work to your interest.

You have to be in the position of asking, “Would I want to work for that pay, and if I did, would I give it my best effort?” A good job is dependent on you, the customer, holding up your end, as well as doing your homework in finding that rare shop that can do the work the right way. While I was able to find a shop with a fixed, agreed price, you can’t expect all shops to do this because, when the paint comes off, the bondo, and the other hidden surprises start to show the problems underneath. Shops know this and have to cover their time and overhead. If you strip a car and you both can see both sides of a metal panel, you’re both in a better position to negotiate a fair, fixed price. If the shop is reluctant on this, walk away. There are a lot of horror stories out there and this project is supposed to be fun.

Of course it’s nice to have a recommendation from another Sunbeam owner, but that may not happen. So be realistic, as people look at the body and paint, then the engine, and lastly the interior.

By the way, quality paint and associated thinners, primers, etc. will run about $800 plus. I was astonished to find that it costs so much just for the materials. Expect a good paint job to run $4,000 to $10,000, depending on the quality of the finished product and how much you are painting. If it is the whole car, inside and out, on rotisseries, that means a lot of area to be covered. To do doors, trunk and hood correctly, you have to take them off the car. If someone tells you he can do the door jams without taking the doors off, walk away.
In the end, we replaced the front and rear fender wells, driver’s floor pan, trunk, rear fender clips, reinforced the front and rear suspension. Also, we positioned a 5.0 liter engine with T-5 transmission and new support, reworked the trunk and hood, added front fender air vents in metal and made new larger pass-throughs for a large oval exhaust system.

So, what did I learn? Be realistic on costs, do a real, hard-nosed estimate, read books on restoration, talk to other owners, look for recommendations, get a firm price for specific body work in writing, work with the body shop, pay them on time and if it is not right, have them fix it now, not later.

and an update from the August 2001 RootesReview:

Restoring a Tiger; A personal Matter by Larry Paulick

How much does it cost to do a top-to-bottom restoration? If you have to ask, you can’t afford it might be one answer.

But most people who go into such projects don’t think of the end game. They get into it little by little and then find themselves at the point of no return: You can’t go back so you have to go ahead because you have too much time, money or emotion invested. 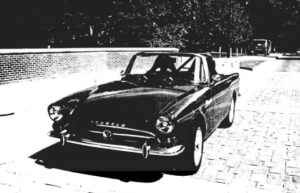 Take a look at the item-by-item list of things that Larry Paulick, College Park MD, put into his project Tiger (which was the start at the recent British Day at Bowie MD. The startling red car was featured in the Rootes Review of April 2001)

Larry says the project took him five years on weekends. That’s a lot of time taken away from family, job and other chores. In terms of money, without getting specific, he says that most of the investment went into paint, chrome and the interior – in other words, the cosmetics. The mechanicals – drive train, suspension, steering – were the cheapest part of the project. The thing about a restoration is that you’re the boss. You (and your pocketbook and your family) decide how far you want to go.

Paulick says, “Should someone do a project like this? Yes, but it takes planning, more planning, and being realistic about time, money and most important, having fun. You don’t have to be a mechanical genius (Paulick is an engineer by profession). Just take your time, solicit advice and help from friends and then enjoy what you’ve accomplished.”

to: Larry Paulick about the tires and wheels, what backspace in the rims? Do you think this combo will fit on a stock 67 tiger? looking to put biggest tire under 67 but little info out there. Please advise. Thanks JIM