By Robert Olah in the March 2002 RootesReview:

From above before raising the car on a lift:

Raise the car on a lift and from below: 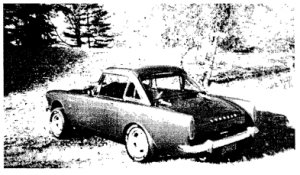 (Robert Olah has been a member of TE/AE since the ’70s and has owned his car since 1972. His car has won over 45 awards at various shows, most recently the 1st place Special Interest prize at New England Region Shelby American Auto Club’s 19th annual Vintage Festival in Lime Rock, CT, Sept. 2001. The car, pictured here, has a 1968 302 CID engine from a Shelby Mustang with 289 Shelby heads, a high rise Cobra manifold, a Holley 850 CFM Double Pumper carb, traction masters, roll bar, Ansen Mag wheels, 13″ front and 14″ rear and many, many other modifications. It is painted a bright purple.)