Most Alpine engines die and are carried to their graves as a result of the internationally dreaded LOP disease. LOP has been the Achilles heel of the Alpine since the car’s infancy. In fact, LOP can be considered as an influential factor when Ian Garrad thought up the concept of the Tiger.

LOP or low oil pressure, like any disease is survivable with an understanding of its causes. It even can be cured, leaving the patient with a perfectly normal life. According to the factory manual, normal oil pressure is “40 to 45 pounds when hot” (and above 2000 rpm, according to me). And they aren’t kidding. If your oil pressure is below 40 pounds, you’d better start looking for a hospital for a cure or a graveyard if you neglect this warning period.

An Alpine engine will run just as long as a Pinto, Volkswagen or Chrysler slant six engine under normal conditions, if properly and regularly serviced. The design of the Alpine engine demands regular service (oil changes, etc.), which the above-mentioned engines can do without and still run just fine. Unfortunately, our engines have been totally neglected through the years, making them look worse off than they really are. The effect is LOP disease, resulting from premature wear of various components.

Now that we understand how we’ve been blessed with LOP, let’s look at what actually causes it.

Rootes engineers designed our engines to run at very close tolerance. They did not allow for abnormal wear. The engines are designed so well that the normal wear rate of internal components is rather uniform. For example, the rings, timing chain, cam and rod bearings, etc. all deteriorate at the same rate, necessitating replacement all at the same time.

With these characteristics, it is obvious why Alpine engines must be totally rebuilt for satisfactory results. A partial patch job is not usually worth the effort and YOU WILL PAY! This discussion is not meant to address engine rebuilding issues, but to serve as a means of understanding LOP problems that follow. LOP almost always (except in racing) proceeds a catastrophic engine failure. It is related to one of two areas. The first is excessive wear of engine rod, main and cam bearings and a loss of oil pump efficiency resulting from normal wear.

The second is a stuck oil pressure relief valve. Although a stuck relief valve is not the cause of most LOP occurrences, it does represent more than its fair share of Alpine owners’ engine maladies. When investigating LOP, it is only natural to check out the most convenient things first. Of course, the relief valve, located just below the oil filter, is the easiest thing to check. It should be checked first, too, to assure its proper operation before tearing into the engine. A discussion will follow later concerning the relief valve.

Now that we’ve cleared the relief valve of contributing to LOP let’s get into the engine. The major cause of LOP is excessive rod, main and cam bearing clearances. Maximum allowable, according to the Rootes factory workshop manual is: Rod .002″, main .0025″ and cam .003″. Except for the cam bearings, these dimensions can be verified by using a material called “Plastigage.” It’s available at most automotive supply sources and even from J.C. Whitney. It is not possible to check cam bearings with this material nor is there an easy way to verify cam bearing clearance by the average car owner.

A good rule of thumb is: if engine mileage is more than 75,000 and/or rod and/or main bearings are marginal, the cam bearings need replacing too! The oil pump system does not have the capacity to accommodate the increased oil flow requirements if rod and main bearing clearances exceed those specified. It will be necessary to either install new bearings or, perhaps, have the crankshaft re-ground. Oil pumps are not a major factor with LOP, although, previously stated, they do lose some capacity with use. Rebuilding of an oil pump by the average car owner is very easy and is the topic of another tech tip.

It is entirely possible in most cases to cure LOP with repair of rod, main and cam bearings’ tolerances and the modification that follows: 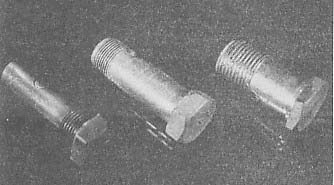 The oil pressure relief valve is a component in our engines that has a significant effect on oil pressure as a potential failure mode. But, it too, can be modified to increase oil pressure. It’s an easy task and can be undertaken by anyone with a few basic tools. There are three types of relief valves in Alpine engines, depending upon engine serial and series number. (see Figure 1) They appear physically different, but all operate in the same manner, i.e. excess oil supplied by the oil pump causes the spring-loaded plunger to open up past the holes on the side of the valve, in turn allowing excess oil to drain back down into the oil sump. If a relief valve is “stuck”, causing LOP, it will be obvious by noting that the plunger does not move freely nor does it completely close the side ports.

Modification of the relief valve will cause engine oil pressure to be in the 50 to 70 pound region. Pressure in this region will do nothing but enhance engine durability for street driven engines and are absolutely mandatory for race engines. Start the modification by removing the relief valve with a 1 3/16th” wrench. Again, refer to Figure 1 to determine the type of valve you have. For this article, the one on the left was used (1725cc). The other two are used in the 1592cc and 1494cc engines. 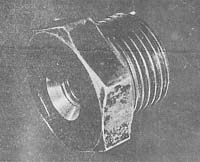 The 1725cc valve is disassembled by using a propane torch to unsolder the copper tube from the threaded housing. The other valves are disassembled by carefully filling or grinding the ends off. They are re-assembled by peening over the ends that were filed away. The remaining modifications are the same for all three valves. The next process involves drilling a hole through the end and center of the valve and tapping it with 10-32 threads. After the tapping is done, countersink the hole slightly. (see Figure 2 for complete operation)

Organize the components as shown in Figure 3. Note the addition of a small disc between the spring and the threaded housing, a rubber “0” ring and a bolt with a nut. Re-assembly begins by placing newly acquired disc into body of threaded housing. Stretch and re-assemble in the reverse order of how the valve was taken apart. Place the small “0” ring on the bolt and screw the bolt into the valve, but do not cause the disc to move. Lightly secure the nut. (see Figure 4)

Install the valve into the engine. Then start the engine and get up to normal operating temperature. A 15-minute trip at highway speeds should do nicely. You should already have noticed a small increase in pressure. Now, with the engine running at 2500 to 3000 rpm, loosen the nut and turn bolt in until desired oil pressure is obtained – about 50 pounds or more for street use. Remove valve from engine, clean in a solvent and smear silicone form a gasket around the threads and “O” ring before tightening the nut for the last time.

One word of caution with this modification: it is possible under certain conditions that with the engine cold, the oil pressure could go well over the gauge limit. The end result is a blown gauge and a messy dash and shoes. If the oil pressure goes over 90 pounds when cold, a change to thinner oil is warranted and/or the rod and main bearing tolerances need checking.

One more note on LOP: Alpine engines must run within one quart of the full mark on the dipstick. Hard cornering causes the sump to go dry, if it is near one quart low. You are better off with too much oil (over-filled) than on the low side.