by Phil Lindsay in the July 1979 RootesReview

With the current gas shortage, the use of vacuum operated secondary four barrel carburetors (such as the 600 CFM Holley R-1850) has become an attractive alternative to those gas guzzling double pumpers with mechanically operated secondaries.

Properly set-up, the vacuum secondary carburetor can offer the fuel economy of a small (350CFM) two barrel carb under cruise condition and a reasonable amount of performance under hard acceleration.

In order to achieve this ideal balance of economy and performance it is necessary to adjust the opening point of the secondaries for the particular car set-up (engine displacement, gear ratios, cam timing, etc.).

I have developed a simple dash mounted light which indicates the initial opening of the secondary throttle plates. With this device, it is easy to monitor the secondaries under actual driving conditions and thus the effect of the secondary opening point adjustment can be made. An electrical ground contact is made through the bottom tip of the vacuum diaphragm stem to the carburetor body when the secondaries are in the closed position. In this case, the dash mounted indicator light is illuminated. As soon as the secondary plates begin to open, the diaphragm stem raises and breaks the electrical contact which in turn causes the light to go out. As shown in Photo #1, a small bracket was fabricated to mount an insulated electrical contact directly beneath the diaphragm stem tip. 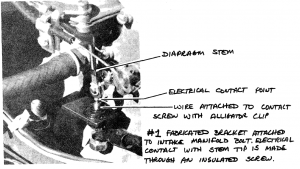 Although the approximate dimensions are shown in the sketch, the bracket must be custom sized for the actual combination of’ intake manifold, spacer plate, and carburetor. Attachment to the intake manifold is made by one of the manifold bolts. A slot in the bracket to accommodate the bolt will facilitate horizontal adjustment. The only requirements for the electrical contact screw are that it can be adjusted vertically so that it just touches the stem tip and it is insulated from the bracket. Radio Shack has several plastic insulated brass screw terminals which can be adapted.

The only critical factor on the installation is the adjustment of the contact screw. A little “trial and error” work may be required to set the height of the screw so that it just touches the stem tip. If the screw is set too high, the secondary plates will be lifted off their rest position and the idle will become rough. Lock-tite can be used to prevent engine vibration from loosening the contact screw. An alligator clip provides a neat method to attach the wire to the contact screw.

The carburetor uses a rubber diaphragm which is linked to the throttle plates. One side of the diaphragm is exposed to a vacuum signal taken off the carburetor primaries; (not engine vacuum). As the engine is operated at higher RPM’s, the air-velocity increases proportionally. The other side of the diaphragm is exposed to atmospheric pressure such that the differential pressure across the diaphragm causes the linkage to open the secondaries. In order to adjust the vacuum level witch initiates the rate of secondary opening specific car application (engine displacement, gear ratios, car weight, etc.), a spring is used on vacuum side of the diaphragm. Since the action of the spring resists the opening of the secondaries,a stiffer spring will delay the opening whereas a weaker spring will accelerate the opening. Holley Kit 85P-3185 contains a set of’ six springs and instructions. Another good source of Holley Carburetor information is found in the book Holley Carburetors and Manifolds by Mike Urich and Bill Fisher HP Books PO Box 5367 Tucson, AZ 85703 (cost $4.95) (Ed Note: now available from Summit Racing at $16.95) 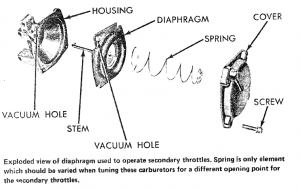