Dr. John Bruney purchased his azure blue Harrington LeMans from a Columbus, OH, sportscar dealer on August 21, 1964. He traded a blue ’63 TR4 (22,000 miles young) for the attractive, blue on blue Sunbeam which had clocked 200 miles as a dealer demonstrator. The car was original–never raced, wrecked or altered after construction-and featured LeMans emblems on engine & steering wheel, plaques on glove box & tunnel, “H” mark on block (from factory), oil cooler, 3rd & 4th overdrive, metal extractor plates on extractor vents, and the LeMans script on the body.

This LeMans has led a “pampered” life: Dr. Bruney enjoys driving his car to shows and events; however, he places a 100-150 mile limit–exceptions are made, of course, such as the 1982 Pennsylvania BASH/FixIn. One outing that stands out in his “scrap book” was in 1964 when Dr. Bruney treated his mother (also a car buff and then in her sixties) to a sportscar race in Lexington, OH. Several notables attending–aside from the Harrington LeMans–were Steve McQueen, Paul Whiteman (the orchestra leader), and Tom McCahill (car editor, Mechanix Illustrated). The Harrington attracted many fans, crowding around and asking numerous questions. The highlight of the day was a compliment passed by Paul Whiteman (during a brief, traffic snarl conversation), “That is a nice looking Harrington!” After that comment from Tom McCahill’s passenger, who was a well-known car collector/fancier, Dr. Bruney began to realize his Harrington LeMans was a rare as well as unusual car. He then started his search for literature and written information on the car.

Dr. Bruney states, “It is interesting to note: I read later that many dealers could not get cars (LeMans) even though they had the advertising materials. This dealer had the car but very little advertising material; hence, I really did not know what a rare car I had purchased.” To highlight other experiences–not including envious stares and double takes by Porsche, Model A and various other drivers–Dr. Bruney has had other motorists follow him to get a closer look and collected the following: 17 dash plaques, 2 first place trophies, 3 second place trophies, 1 show trophy, 7 show prizes plus Ohio Morgan Owners Club Favorite Car Award and Third Peoples’ Choice at the 1983 Big British Car Club Show in Columbus.

In 1976 the car was taken down to bare metal, and repainted with primer, sealer, and three coats of original Harrington azure blue lacquer (ordered from Harrington, Ltd., England–the last of that lacquer). It was rustproofed before and after painting to ensure longevity. Note: Gas filler door was not painted to show the exact match to original color and texture. In twenty years of ownership the only additions have been new fuel pump, water pump, dual mufflers, and replacement Michelin X tires in lieu of the white wall Dunlop Road Speeds. The engine compartment, overall exterior and interior are all original thanks to plenty of TLC. This car is complete, one owner with only 35,385 actual miles on the odometer. 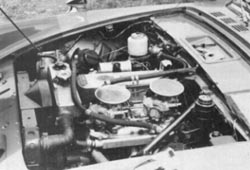 Now let’s cover some characteristics of this Harrington LeMans (remember, each car is unique although the “family resemblance” is there):
Overheating is a concern to many Sunbeam owners. Dr. Bruney reports that in a 1982 antique car parade the “tough little engine” stayed right at 180º on a beautiful 80º day. Many of the Mustangs, MG’s and Model A’s “steamed over” during that parade.

The car is, comfortable-on long or short trips. It has a ”solid” feel and corners nicely with some body lean but not really noticeable inside. The car does not float or bottom out on RR crossings or road dips. Steering is precise with good feel and control. The shifter has a short throw and the racing clutch must be fully depressed to shift (which can prove tiresome in stop and go traffic), brakes with servo assist give smooth/straight stops with minimum pedal pressure (and are hard to “fade”), and the engine is peppy having good acceleration past 3000 rpm–it is also quiet at higher speeds when overdrive is engaged.

As for the interior, the front seats offer good support & stability and are comfortable.
There is plenty of head room because of the high roof line and leg room is good when seats are adjusted. The rear seats are, good for children, however, there’s no leg room for adults if the front seats are back. Ventilation and heating are good. Luggage capacity is excellent for a sportscar; rear seat may be folded to haul a Christmas tree! With seats up, folding chairs, flight bags and even card tables are no problem.
The longest trip for the LeMans was to the Pennsylvania BASH in 1982–about 900 miles round trip. The gas gauge went crazy shortly after leaving, so Dr. & Mrs. Bruney would “top off” every 100 miles. In the mountains it took 6 gallons and 4 gallons on ,level terrain; all that at an average 70 mph. The gauge was fixed at Tiger Tom’s–that’s what a BASH/FixIn is about! -The oil pressure was 50 for the whole trip. 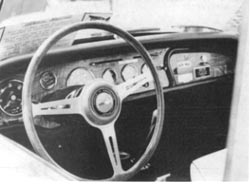 All in all, Dr. & Mrs. John Bruney wouldn’t trade their Harrington LeMans for the world. Dr. Bruney fondly states: “The LeMans is comfortable, fun and a real performer. The virtues of the car far outweigh the two irritating faults …. On the trip to Harrisburg for the BASH in 1982, I gained great respect for the beautiful little thoroughbred!”