Outwardly, 1961 was not a year of big changes in the Rootes line. The new 1961 models were introduced in September of 1960 (usual Rootes policy). On the exterior there were no changes at all on the Hillman and Singer lines. The single noticeable change was the introduction of a hypoid rear.

At Sunbeam the changes were small, but more noticeable. The Series I Alpine was replaced by the Series II, the major external difference was a chrome strip above the front edge of the door to provide both a track for the window when it was rolled up and to insure a better seal between the door and windshield. Under the hood, the difference was a tenth of an inch. The tenth of an inch was the increase in the bore size which increased the engine size to 1,592 cc (1600). The horsepower increased to 85.5, not much but it provided a noted improvement in performance. Not that the Series I was slow, a race prepared Series I was the SCCA class G championship winner in 1960.

The Series II Alpine formed the basis of Rootes assault on LeMans. Sunbeams had long been the scourge of international rally circuits and now with a good sports car available, Sunbeam was moving into racing again. Sunbeam and Talbot had done very well at LeMans thirty years before and now they were going to repeat the attempt.

Unlike the rally cars, the LeMans cars were not production cars. Sunbeam rally cars were not “one off factory specials”, they were straight production cars with minor modifications such as using flexible fuel lines, relocating the coil, etc. The LeMans cars had fiberglass bodies with a fast back roof line (not roadsters) and an aerodynamic front end. The engines were modified extensively, the horsepower output was not given but must have been well over 100. The effort was quite successful, the Sunbeam team won the “index of performance.”

The LeMans cars were indeed prototypes, a production model, the “Harrington LeMans” followed in 1962. This was a beautiful, part fiberglass G.T. fastback. The engine pulled 104 horsepower from a highly modified Alpine 1600 engine. The nose, doors, floor pan and suspension were from the Alpine, but the roof and rear section were new fiberglass pieces. Most of the engine and chassis parts were available for the regular Alpine via special “racing” or “tuning” kits. This beautiful car could be had for the sum of $3995–very high for 1962 and one of the reasons for the rarity of the LeMans model today.

It is rather difficult to find 1961 Sunbeams today, the reason being a strike at the Rootes plants during 1961. Despite the strike, Rootes turned a profit of over one million pounds (or about 2.5 million dollars) that year.

During its two year run, the Series II Alpine accounted for 19,900 sales. This figure also includes an unknown number of Harrington LeMans models.

Meanwhile over at Hillman, the big news for 1962 was the new Super Minx. A rather big, ugly car that was a larger version of  the Minx. The running gear was similar to the Alpine, the 1600 engine with one carb and a cast iron head developed 62 horsepower. The transmission, rear end and such were all Alpine components. Not many Super Minx Sedans, convertibles and wagons were sold. The Super Minx would survive only until the Fall of 1966, by which time minor modifications were made to the body, Singer and Humber versions were also produced. The last model had the 1, 725 cc engine.

The Rapier continued as the Series III and then Series IIIA versions, powered by the 1600 Alpine engine and adding front disc brakes. The Rapier was no longer the top rally car it had been in 1958-61. Other makes were now beginning to make inroads into the international rallies. The Rapier remained, however, a comfortable, fast touring car in both sedan and convertible forms.

The final version of the high finned Alpine was the Series III. Although power output did not increase, the car was refined further. Deflector (ventilator) windows were added to the front doors, the trunk was nearly doubled in size by relocation of the gas tank to the rear fenders (those fins really did something now, they held gas!) Overall, the Series III was a big improvement over the Series II. 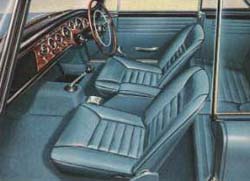 If that wasn’t enough, there was the GT version which offered enclosed motoring with a better interior and a quieter engine. Although the hardtop was removable, there was no convertible top, so you could only take the top off in guaranteed good weather.

A total of 5,800 Series III Alpines were built in 1963 when the new Series IV replaced it.

1963 also saw the introduction of the Sunbeam Imp, a revolutionary small car. A rear engined car with swing axle rear and front suspensions and a fascinating overhead cam engine (Rootes’ second, the Singer 1500 being the first.) The Imp engine was purchased from Coventry Climax after a long history as a generator and pump engine and as Grand Prix power plant under the one liter formula. With a selling price of only $1,495 the Imp should have been a winner. It was, except in the U.S., the relatively fragile transaxle being its problem. The Imp was offered in the U.S. until 1967 with the later models being called the Series II.