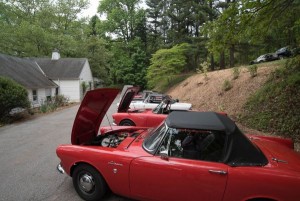 he 40th BASH was a long weekend of fun in the hills and valleys around Harrisburg, PA. We had 36 people, 8 Sunbeams, 2 Triumphs, 1 MGA, and a Cobra. The parking logistics are a bit complicated here in the woods.  But thanks to Wes Rittenhouse for his adept suggestion of which cars, Beams or Regulars, got to park on the black top part of the drive, and which got to head up to the upper meadow on the grass. Beams won!

The event started a little earlier than planned this year when the two Shipman brothers from Virginia showed up on Friday afternoon in search of Sunbeam parts. They had met John Shoaf at Carlisle Import and Kit Car Show and he pointed them in our direction. We chatted with them a bit and they came back on Saturday to meet and greet and join the club.

Traditionally, people in town, or people from far away, meet for dinner someplace nice nearby.  As McConlogues have only been here for 2 years, we took a chance on Zias Trattoria, a nice little Italian restaurant in an old church in  Linglestown, PA. The food was good, the atmosphere and service friendly. 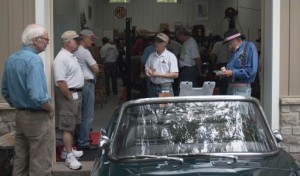 We had a lot of activity planned for Saturday starting with Joe Parlanti’s tech session on his LED light package. After the demonstration Joe quickly sold out of the stock he brought along. 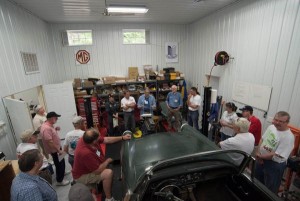 Joe McConlogue’s “barn find” ’67 Series V, which has been in the garage since 1976, was up on the lift and everyone had something to say about its condition and its future. Votes were everywhere from “Give it to me”, to “Part it out,” to “Of course you can restore it, it’s so original.” (I heard–with my own ears–someone, who shall remain nameless say, “Maybe we could sell our Tiger and work on this instead.” I should have offered him an even trade on the spot!) 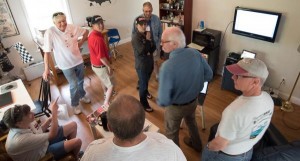 Joe McConlogue and Tiger Tom Ehrhart led a conversation about collecting Tech Tips from back issues of the RootesReview for additions to the website. The work is to be divided up in manageable chunks and can be done by anyone with an interest. It’s not particularly complicated computer work, just reading the articles from old RootesReviews, checking that the title is representative of the article, and attaching the final copy to an email to be uploaded to the site. (If you’re interested in helping with the task, detailed instructions will be available soon. Contact Jo************@ya***.com  or **@Ti*******.net to get on the list to help.)

The gimmick rally, “Blue Mountain Run,” was about a 20-mile, 45-minute ride through some great winding roads in the area. Rally winners:

While a few other people came further, Judy and Bob Sharkey won the award given for the longest trip to the BASH in Sunbeam. They drove 382 miles.

Valve Cover Racing was a hit again. Thanks to Tiger Tom Ehrhart for bringing the set up and the extra Valve Cover Racers so people who were not so prepared could participate. Winners of that event were: 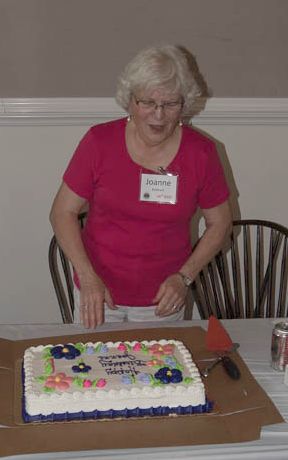 We ended Saturday with a birthday cake and some appropriate singing for Joanne Ehrhart.
There was also a showing and playing of the Nelson-Wiggen nickelodeon, complete with a nickle slot!

As people were preparing to think about leaving, it started to rain.  We found some clear tape for Wes Rittenhouse to seal his roof to the windshield. He says he never has the top up and didn’t realize how big a space there was between the two parts.

Ted Casey showed up on Sunday, he got a tour of the garage and an apology from us for confusing the dates.

And as they say in the movies, a good time was had by all!

The rest of the pictures

A great BASH with spirited Beamer hosts. Thanks Kerch and Joe for keeping the Beam beaming. A fun read with nice photos too. You guys are tops. Considering all the solicitation for votes on what to do with the Barn Find Alpine; What was the final out come? We deserve an answer and can’t take the suspense much longer. Trade it on a Tiger? Keep it, Restore it, Make yard art, Part it, Scrap it…….heaven forbid.
TT