I recently installed third brake lights on all my Sunbeams. I have long been concerned about not having enough visual warning for other drivers and I thought the addition of a 3rd brake light would provide an additional safety net for me.

Two of my cars are fitted with hardtops. Since I very rarely remove them, I decided to mount the light to the base of the hardtop. I found a 12 volt LED light at the local Advance Auto store that I thought would fit my needs. It is about 4 inches long and 1 inch high with a flexible plastic base. By using double sided tape to mount the light I did not have to drill any holes into the hardtop.

The unit I used has a single wire for the “hot” 12 volt connection. The hot wire has a male bullet terminal on the end. I removed the lens from the unit and soldered a length of 16 gauge wire to the ground terminal. (I did not want to drill any holes into the hardtop for grounding/mounting the light.) I attached a female bullet terminal to the end of the ground wire. I fed both wires under the rear hardtop seal and into the boot area.

It was then a fairly simple operation to connect the LED light to the existing brake lights.

I attached a length of the 16 gauge wire to a piggyback solder-less terminal. I removed the existing brake wire from the socket connection and connected it to the piggyback terminal. I then attached the piggyback terminal to the socket connection and fed the 16 gauge wire through the trunk and up into the boot. I cut the wire to length and attached a female bullet terminal to the end. I connected the LED hot wire to the brake lights and connected the ground wire to a snap at the base of the boot.

By using bullet connectors on both the hot wire and the ground wire I can easily disconnect the light when removing the hardtop. The light has good intensity and is easily visible from behind. The cost of the light and materials was less than $10.00. 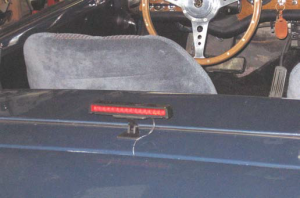 My Series IV does not have a hardtop, so I needed to find a light that would be suitable for mounting on the trunk (boot) area. J.C. Whitney has a variety of 3rd brake lights available, including several with pedestal mounts. I ordered a 16 LED pedestal mount light from them, catalog number WA124336P. I wired it to the existing brake light circuit in the same manner described above. The cost, with shipping, was under $14.00.

While the addition of a 3rd brake light may not prevent accidents caused by giggly girls on cell phones (see a previous Rootes Review article about the wreck of John Logan’s Tiger!), I do feel more secure about my backside visibility. The cost is minimal. The peace of mind is – well, priceless!