In September, 1964, the semi-popular Sunbeam Alpine received a massive dose of performance adrenalin. Under the careful tutelage of Carroll Shelby, the Alpine entered the scene as a conservative, suburban Cobra. Sporting a shiny new, small block 260 cid Ford V-8, the Sunbeam Tiger was born and Americans gobbled them up. Unfortunately, the cars life span was short. Imported to the United States by Chrysler Motors Corporation, it didn’t take long for the corporate heads to convince themselves that marketing a car using the competition’s engine was an unproductive practice. And so the Tiger became a classic.

(Ed note: Caution! Costs shown in this article are from 1978. If only it were still so!) Today a clean Tiger costs 5000 dollars–if one is lucky enough to find a guy dumb enough to sell one. Stock Sunbeam Alpines, on the other hand, are still available to the discerning buyer of slightly used sports cars for a mere 700 dollars. Unfortunately, the four banger just doesn’t have the pizazz of a Ford V-8.

John Thomson of Fort Bragg, North Carolina set out to solve the problem of giving more performance to the Alpine without the expenses and radical changes required to shoehorn a Ford V-8 into the Alpine. To make a Tiger out of an Alpine requires new steering, suspension changes and radical surgery to the fire wall.

John’s first step was to locate a Sunbeam Alpine. After a search of several months, he discovered a 1967 Mark V sitting outside of a garage in a small North Carolina town. The engine, or what was left of it, was nestled in the trunk. Mice had set up housekeeping in the seats and three wheels were missing. He was shrewd enough to negotiate a deal of 260 dollars for the remainder of the car. Next, was the acquisition of a wrecked 1973, V-6 Capri with only 18,000 miles on the odometer. For 656 additional dollars a complete new drive train and wheels was available for installation
in the Alpine.

The second step was to combine these two fugitives from a junk yard into an inexpensive substitute for the Sunbeam Tiger, a “Mini-Tiger.” And why not, the Tiger was the product of a Ford V-8 in an English roadster and the Capri, a German Ford V-6, in an English roadster could have been the next step had the cars life not been so short lived.

The swap, although not a “bolt in” conversion, was not that difficult and anyone with a fair mechanical knowledge and the tools and equipment could easily duplicate the project.

Since John wanted the steering and front suspension to remain unchanged, the location of the motor mounts required the construction of 3/8″ steel extensions bolted to the V-6 block. Next, a 3/8″ steel plate was bolted to the front cross member of the Alpine. The engine was now supported at the front in the same manner as the old cast iron four. The stock rubber mounts from the Alpine were used to support the engine from the cross member. This is only one method and the only important thing to remember is the fact that the engine must be supported at its front to use the existing cross member mounts. The mechanical fuel pump interfered with the frame and was therefore removed. An electric pump was then mounted close to the gas tank to provide the go juice to the carburetor. In order to retain the power brake booster in the stock location the alternator on the 1973 V-6 Capri engine was moved from the right to the left. This was accomplished using the alternator mount from a 1974 Capri V-6. The stock Alpine radiator was retained and the only modification to the Capri engine was to reweld the bottom water pump outlet so it came straight out rather than down. Since the outlet is aluminum it was necessary to weld it using a heliarc. Tubing headers were constructed by hand in order to bypass the steering box and cross linkage. No cutting of the frame was required. By using a custom chrome air cleaner, no problem was encountered with hood clearance. It should be noted that the engine, complete with carburetor was lowered into the chassis and the hood buttoned down. The motor mounts were then constructed from wooden templates and fitted from below. During this time, the engine was supported by a hydraulic jack from below. Care was also taken to ensure that the steering cross arm which operates behind the engine did not rub on the bell housing or block when the steering wheel was turned. The last problem was to hook up the Capri wiring harness to the Alpine wiring. John finally decided to use the complete Capri wiring harness attaching it directly to the Alpine dash. He even incorporated Capri switches, clutch and turn signal stalk. The turn signal stalk now operates the high beams and horn in the Sunbeam.

Rather than go through the problem of adapting the old Alpine 4 speed to the V-6, John elected to go with the newer lighter Capri transmission. Using two pieces of angle iron, the Capri transmission bolts right to the cross frame of the Alpine. Again, no cutting was necessary. The shift linkage was shortened 4 inches and a metal box was constructed and attached to the transmission to support the stock Capri shift lever. The lever was bent at a 30 degree angle to allow clearance between the radio and the shift knob. The Capri mechanical clutch linkage was adapted to the Alpine clutch pedal using parts of the Capri pedal arm. Finally, the Capri yoke was welded to the Alpine drive shaft.

Initially the 3.89 to 1 Alpine rear end was retained. Although satisfactory, it was not a perfect mate for the transmission and gas mileage and drivability suffered. Therefore, the Capri rear end was used to make the complete drive train compatible. This was a simple swap, requiring only the welding of the spring pads and shock mounts from the Alpine rear end to the Capri rear end. Helper springs were added and four Capri wheels sporting Goodyear Rally A60 X 13″ tires gave the new Alpine traction.

The finishing touches included the addition of a set of bucket seats from an MG Midget, a TR6 leather steering wheel, and a coat of 1977 Ford Jade Green paint.

The final project is indeed a “Mini Tiger”. The only outward change is a V-6 emblem where the 1725cc four emblem used to be. The Alpine/Capri handles smoothly since no changes have taken place in the chassis and the V-6 weighs no more than the old four it replaced. Rear wheel track using the Capri rear end has changed from 48″ to 53” but this poses no problems in handling. It is necessary to cut the inside lip of rear wheel opening if wide tires are used but this is required in many swaps and poses no real problem.

John now has a sharp fast sports car with classic lines for less than 2000 dollars and he enjoys having Alpine drivers follow him around trying to find out when Sunbeam built a V-6 model, 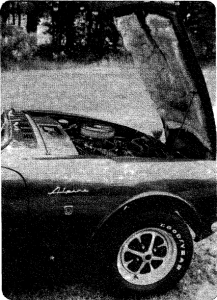 what year capri rear end went in this ?? what is the spring perch deal?? are they modified if so how???

It’s great to read of the V6 Swap year ago!

Lots have changed since…..

It has been almost a year ago since I last visited this Article by John Thompson on the 1st V6 Conversion to an Alpine.

Driving my Blue Boy V6 is a real pleasure and it draws a lot of attention wherever I go in it.

Sometimes there are questions from former owners or observers of the Sunbeam Alpine that approach me with statements such as “I never knew they had V6’s?” Or My friend had an Alpine but it was a 4 cylinder!

Wanting to see the engine, I open the hood and the 1st thing they see are the custom valve covers SUNBEAM V6, Being amazed it has a V6 engine, it leads to all kinds of questions, and of course I lead them on to it being an Original product of Rootes…. for a while, then that leads to more discussion….