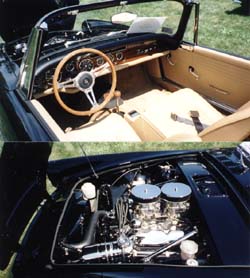 The Tiger pictured here received the first place award in the Concours Personalized class at SUNI III in 1999. I am quite proud to have accomplished this against some extremely nice cars. But it is even sweeter because of how the car came to be. What Paul Harvey would call “The rest of the story”.

Dan Cameron and I used to go to the TE/AE Uniteds together when we both lived in Alabama in the 80’s. His car never seemed to be quite ready to take to a United, so we would take my Tiger. It was a Silver ’66 Mk1a with a 289 and it was a nice car but not as nice as I wanted it to be. We would kill time by conceiving of our “ultimate Tiger.” We would plan the car in detail…the color, the engine, the transmission, the rear end, the interior…even the undercoating. It was these discussions that formed the basis for my current black Tiger.

Skip ahead a few years to 1992. John Webber mentioned to me that he had gotten a little burned out on a Tiger restoration he was performing. Coincidentally, I was just getting in the frame to mind to tackle another one at that same time. So I bought John’s project car. It was a bare metal shell (no engine, drive train, interior…completely bare). John had replaced the needed sheet metal. Along with it came some new parts and all the rest of it was in boxes. 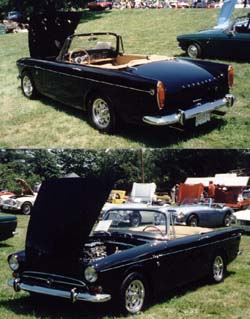 My goal from the outset was to build a car along the lines of my ultimate Tiger and take it to SUNI II in 1994 and win the Personalized Concours. It was to be perfect. My time and money were no object. This was going to be a car I kept the rest of my life and I was going to do it all the way.

When I started the restoration, I wanted to have something special under the hood … dual four-barrel carburetors. I had seen two other Tigers with dual quads and had to have one myself. My theory was that something worth doing was worth over-doing.

Well, as those of you who have done a restoration know, it takes longer than you can even imagine at the start. And costs more too. Kind of like the baseball manager, who, when hired, was given an unlimited budget and then fired later for overrunning it! The painter, who I looked long and hard for, said he would have the car back to me in 90 days. He had it for 18 months! When SUNI II rolled around, the car was not yet finished and, a bit dejected, I skipped the event knowing that my window of opportunity had passed. While I had built what I thought was a great car, it was five more years until the next SUNI and by then, the car would be an aging restoration. Not much chance against the superb cars coming out today. Fortunately, I was wrong.

So to win in 1999 and accomplish my goal was even better than just winning itself…even if was five years later than I had anticipated! My thanks to Dan Cameron for his contributions to the concept and to John Webber for his hard work in getting the car to the point of my purchasing it.

If I had to do it all over again, I absolutely would do the dual quads again. The car gets so much attention! When asked why I put two four-barrel carburetors on my Tiger, I smile and say, “Because three won’t fit.”