And this year’s award
for a bad four-letter word goes to…
RAIN!

Joe and Kerch McConlogue hosted the BASH (Bring A Sunbeam Here) for the second year in Joe’s TajMaGarage on the side of one of Pennsylvania’s many Blue Mountain ranges.

The event started with a rowdy dinner for seventeen early Beamer’s at the popular Stoney Creek Inn on Friday evening. It was a beautiful day.

Bob and Judy Sharkey proved it by driving their V6 Alpine, top-down, from deep inside Virginia to the BASH in Harrisburg, PA.

The BASH location was beautiful: slick BASH headquarters, outstanding BEAM enthusiasm and two Alpines. One lives on the mountain! Thirty-five attendees with lots of enthusiasm and only two Beams? Wait? What? Why? A four letter word and it starts with an “r”, RAIN!!! After a beautiful Friday, most people kept their cars tucked in dry storage.

But it did not dampen the event. The TAC team–Tom Calvert, Joe Parlanti and Ron Silber–was able to inspect two potential Tigers (one was, one was not) out of five scheduled to be TAC’d. Three were no shows. Rain again! 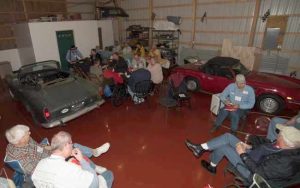 However, the Beamer’s who did make it were dry in the garage with plenty of food, drink and BEAMing dialogue.

Mark Petri said, “I’m gonna go sightly out on a limb and say that while the weather was uncooperative, it did provide more opportunity for just socializing–which is nice because some events are so busy that not much ‘visiting’ can happen.”

Being stuck inside was also great for tech sessions. After all, what is a BASH without some techie talk among friends?

We were given a demonstration of Plastigauge by Joe McConlogue including the reasons that it should be used to verify bearing clearances on used or rebuilt engines.

Tiger Tom Ehrhart demonstrated the mechanical advance on a distributor and why it is important for driveability. He also gave a short speedometer and tachometer calibration talk.

McConlogue’s had a great rally planned with a spectacular view in the neighboring mountains. But with rain and only one Alpine for 30 plus people to fit in, it was a no go. They are saving the rally for next year. Watch for it. Carlisle Import and Performance Weekend.