Have any of you ever tried to locate a driveshaft yoke for a 25 spline transmission output shaft? If so, you already know they are nearly impossible to find. The 25 spline shaft was used on very late Series V standard transmissions as well as on some Borg Warner automatic transmissions. My recent experience in attempting to locate a 25 spline yoke to match up with the output shaft on a rebuilt automatic transmission was more than a little frustrating. There do not seem to be many around, but I finally located a yoke, only to find the tail shaft housing on the rebuilt transmission would not permit me to install it. More frustration! Here’s the story:

I recently purchased a rebuilt Borg Warner automatic transmission. Because the information on the ID tag was worn off, the seller could not positively identify it as a model EP or 3EP. The seller assured me that it was for an Alpine and I bought it. I knew it had a 25 spline output shaft when I bought it. When the transmission was delivered it became immediately apparent that it was neither an EP nor a 3EP. The tail shaft housing was longer by 2 ½ inches and the cross member mounting configuration was different. The difference in the tail shaft housing transmission mounts made it impossible to use in the Alpine.

So – what can you do if you have a newly rebuilt BW automatic with a 25 spline output shaft that cannot be installed in the car? Find a way to make it work! I was quite confident that the various BW35 units shared all of their critical components – for example, the front pump assembly, valve body assembly and rear pump assembly. I decided to tear down one of my spare 3EP automatic transmissions and exchange the ring gear and output shaft from it with the one in the newly rebuilt unit. If it all worked I would solve two challenges at once. I would be able to install the unit in the car, and I would be able to use the 10 spline yoke and driveshaft I already had. 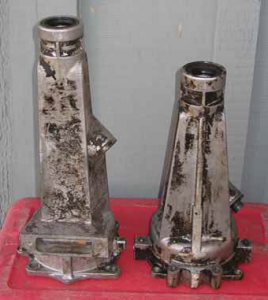 Using my Borg Warner workshop manual as a guide it was fairly easy to read the directions, look at the workshop photos and disassemble both units. After removing the transmission from the converter assembly, the valve body assembly and front pump assembly are removed from the transmission housing. The front bands and the front servo unit also need to be removed. Next the center support and planet gears are withdrawn. Then the rear bands and rear servo unit are removed. Before the rear pump housing and ring gear assembly can be removed both the speedometer drive gear and the governor must be removed from the output shaft. The rear pump housing/ring gear assembly is then removed by passing it forward through the transmission housing. The rear pump assembly can then be dismantled and the long, 25 spline shaft and ring gear removed and exchanged with a shorter, 10 spline shaft from a spare model 3EP.

Reassembly is essentially the reverse of the tear down. Be sure to have new gaskets and seals for reassembly. Once the transmission was reassembled I attached the model 3EP tail shaft housing and reinstalled the modified transmission into the car. The transmission works well and it appears there are no other issues to resolve.

Over the years I have had several conversations with other Alpine owners who were trying to locate a 25 spline yoke to use with their 25 spline transmission. The procedure outlined above, which took me about 4 hours, will allow you to adapt your transmission so that it can use the more common 10 spline yoke. Whether this will also work with the manual transmission I cannot say for sure. I suspect, though, that it will.

Addendum: The Borg Warner 35 model 3EP is the transmission originally used on the Series IV Alpine. According to the BW workshop manual it is the only BW35 model designed specifically for the Alpine. There are, according to the workshop manual, twelve different BW35’s that were used with Rootes vehicles. Of the twelve I know the EP and the 3EP will bolt up to the Alpine with no modification. I suspect the 5EP and the 15EP will as well, although I have no personal experience with either. That means that there are at least eight BW35’s that might work in the Alpine with some modification.