by John Thompson in the December 1978 RootesReview

Like so many cars whose production end opened the door to a classic automobile, the Sunbeam Alpine develops more and more interest each year. Unfortunately, like many classics, repair parts are becoming scarce and an engine rebuild can set you back 600 dollars. Tommy Stanbro, North Carolina Regional Representative was faced with this dilemma in the 1967 Alpine he had acquired. The car had a good body but a tired engine and transmission. Additionally, his wife had been bugging him about coming up with an Alpine with an Automatic so that she too could enjoy driving it.

Tommy was lucky enough to find a low mileage, wrecked Mercury Bobcat with the 2300cc four and an automatic transmission. This would be the ideal drive train choice for the Alpine. It was a Ford product and, after all, a Bobcat was sort of a mini Tiger.

The swap is almost a “bolt in” conversion with no drastic changes required of the body, frame or steering. Also, the car can be converted back to the stock engine and transmission with little trouble and Tommy retained the old drive train so as not to destroy the classic value of the car. If you would like to try this swap, here are the steps.

To place the Bobcat engine in the Alpine requires the following steps:

The stock 3.89 to 1 Alpine rear end was retained and to Tommy’s surprise the stock Alpine yoke slides right into the automatic transmission and the drive shaft is the right length with no cutting required. 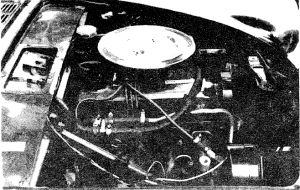 Tommy now has a modern engine and transmission in a sharp, fast sports car with classic lines and his wife, Vi, has a Sunbeam to drive when Tommy drives off in his red Tiger

The comment: “The swap is almost a “bolt in” conversion……”

Nice conversion, But, indeed a tad bit more than a near bolt in.

A discussion about “finding” and engine and perhaps a tranny that can be installed without a “kit” pops up on occasion which leads to all sorts of exchange in ideas as to what will or will not work.

My ideas is regardless as to which way you go please complete your project insuch a fashion that you will be “Keep’em-on-the-Road”…… not a trrip to the scrap yard.