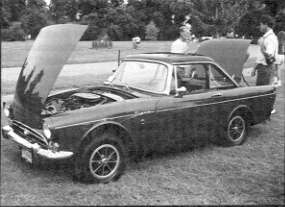 We were early arrivals at the Marriott. As we pulled into the lot we saw Eric Gibeaut sans Sunbeam running around with last minute details demanding his attention, and he was grinning from ear to ear. [An aside about Eric and Joe: These two accepted a gargantuan task late-on and turned it into one of the best Uniteds ever-and both were totally pleasant and hospitable throughout the weekend. And to finish the event remarked what great fun, let’s do it in Charleston again soon!]

More and more Sunbeam enthusiasts began to arrive and United XV was off and running. Thursday’s main happening was the Bessinger’s Cruise-In for dinner. We all made a 5 mile dash to Bessinger’s Barbeque for some totally delicious Southern style cuisine. Even the folks who made a long turn (there is no wrong turn in the Sunbeam dictionary), got plenty to eat and relaxed with the crowd of fellow Sunbeam lovers over a meal as diversified as our group itself. Delicious! Then, back to our HQ at the Marriott and an evening of making new acquaintances and renewing old ones!

Friday brought more `Beamers rolling in and the Hospitality Suite reopening with the beginning of the TE/AE consumption of 100,000 donuts rounded up by the only other “locals” Jerry and Angela Glasoe (Goose Creek, SC). The Parts Room swung into action with morning sales boosted by some fast and heavy showers (weather stripping became an instant big seller!). Next, we were off and running for a guided bus tour of Charleston, -well done and truly informative tour of our host city. Tech sessions, the harbor cruise/dinner, and late night chat in the hospitality suite rounded out another day in Charleston.

Saturday, TE/AE members tore towards our goal of 100,000 donuts as the Hospitality Suite opened. Late arrivals registered, the parts room opened and members polished their cars to a blinding shine in preparation for our trek to Charles Towne Landing and the CONCOURS! We all made it under our own steam or with a helping hand (Ian and Tom’s Excellent Sunbeam Adventure in Vol.18, No.2). Eric and Joe arranged for the first ever panoramic photo of the Sunbeams shot from the roof of the Schulte’s “borrowed” motor home. (If you would like a copy of this photo, they are still available. Specify if you want cars only or with owners, cost still $30 for one or $55 for both from Crabtree Photographics, P.O. Box 1452, Morgantown, WV 26507. The 52″ x 10″ panoramic photos are really sharp looking!)

The Concours and catered luncheon (more addictive Southern style cooking …oh the calories!) at a beautiful, historic location on a perfect day all went too fast. Back to the Marriott for more late afternoon parts swapping and then the preparation for our annual awards banquet. The reception and banquet added to our southern experience (and girth-we should have scheduled a slot for the motel gym, Losing to the Oldies with Eric & Joe…). And then the much awaited awards. An eerie hush settled over the crowd as Steve Hansen pulled the lucky winners of door prizes-much coveted United VIII belt buckles, Triflo, FelPro caps, T-shirts and some much needed and gratefully accepted Sunbeam goodies plus Marriott gift certificates were handed out to the oohing and aahing audience. Then Mike Smith our Concours Chairman took the podium to announce the Concours results: 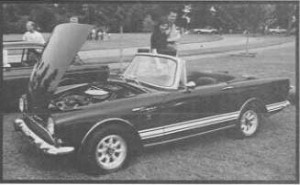 A special thank you to Mike and Linda Smith for all the work on the concours and to the following judges: Scott Woerth, Dave Spiwak, Teresa Spiwak, Jerry Porsch, Jim McKinnon, John Logan, Doug Jennings and Linda Hansen.

Saturday night at a United always has a sad note.

It is realization time that the United is winding down with only hours left. After the banquet socializing in the hospitality suite and parts room carried us into the wee hours. A bit of rest refreshed all to again attack our 100,000 donut goal in the a.m. hospitality suite before attending the annual membership meeting (it would be interesting to learn how many gallons of soda, coffee, beer and o.j. are consumed at a United-perhaps a prize could be awarded to the nearest guess). After the meeting, we headed for the autocross at the Charleston Naval Shipyard. A day of intense fun was had by all (as covered in Vol. 17, No. 10). 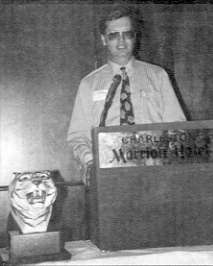 United XV finished with plenty of pleasant memories for all. A big thank you to the host city of Charleston-it is a great place, for a United or vacation. Hats off to Eric Gibeaut and Joe McLaughlin for being our coordinating team and a thanks to those who supported the effort: Hugh Cannon, Eric’s Mini Cooper buddy who designed United XV logo; local members Jerry and Angela Glasoe, for working so hard to bring us the hospitality suite munchies; Jim D’Amelio, for organizing the parts room; the Hansen’s, for locating such great door prizes; the door prize donors, for their generosity time after time; Dave Noutilla, Jerry Belding & Steve Earhart, Eric & Joe’s co-workers who manned the hospitality suite and Jerry for the video coverage; Wally Swift, for the autocross; Dan for filling in for Dave (sounds kind of Olympic); and all the others who helped make XV a memorable United. Joe McLaughlin gets a special hug for spending so much of his 50th birthday weekend seeing to everyone’s enjoyable visit to his fair city. All in all a great experience-Eric and Joe said they had so much fun they wanted to do it again soon. Eric has restated this sentiment since, and maybe our next southern United will once again bring us to Charleston, South Carolina.

Every United sees the presentation of the Lord Rootes trophy to a member of TE/AE. The recipient must be a member in good standing, attending the United with car. Other determining factors are demonstrated commitment to the club/marque, active promotion of the marque, and performance of service for TE/AE. 1992/93 recipient was Barry Schonberger: past president, avid autocrosser, tech manual team member, organizer/coordinator of Indy United and a definite plus to the TE/AE membership rolls with his constant support and assistance time after time. Congratulations to Barry and thank you for all your contributions to our club and our marque.

The last day of United XV was certainly variety plus for many members. It was a day full of goodbyes and winding down for all with the exception of those who braved the threatening skies to AUTOCROSS! The site was the Charleston Naval Shipyard-an excellent choice for a good run. Autocross organizer/coordinator, Wally Swift, teamed up with the local SCCA (South Carolina Region) to produce a long day of car runs and fun for all participants. Event organizers, Eric Gibeaut and Joe “Birthday Boy” McLaughlin, both were on site to cheer for our Sunbeam team and provide soda/munchies until someone inadvertently took off with the cooler.

The Keith Porter Award (the autocross trophies for fastest run by Alpine member and by Tiger member) goes to Jerry Dinser – Tiger and Wally Swift – Alpine. Take a look at our pictures and next time YOU can try your skills. If you are hesitant, just ask someone who was there about the fun–rumor has it that two novices (Gord and Mark, we won’t mention last names) wanted to continue until dark… Well, it was fun and, incidentally, it did not rain! 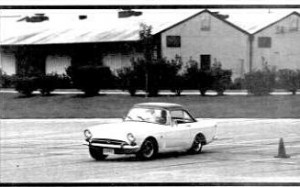 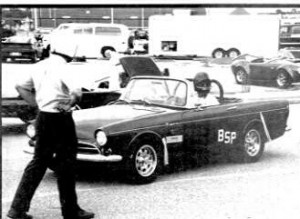