United East II was quite a success, all the activities went off as smoothly as planned and we even got a couple of pluses. The weather over the weekend was GRRREAT–sunny and warm. Jack Fields handled registration and everyone’s room was ready and no one was turned away at the banquet. Thank you, Jack.

The parts swap started early and a couple of cars, three I think, changed hands and everyone was pleased. Concours started at noon this year (see report) with a display of outstanding Tigers and Alpines. Thank you Ladies and Gentlemen and special thanks to Mike, Larry, Larry and Wally and all the judges. Thanks also to Sharon (editor) who tabulated the scoring for the Lord Rootes trophy. There were as many as five trophies per class, two most outstanding awards and two special service awards, one to each of the club’s past presidents, John Wotring and Ron Rogers.

Chili and beer were served during the concours and none got on the cars.

Cocktails at seven, dinner at eight. Delicious and well received. Curt Mienel, president of the Sunbeam Car Club,and Rick Kopek, Vice President of Shelby American Automobile Club, addressed the faithful after dinner with comments both serious and light. Awards were presented and door prizes donated by Classic Sunbeam Auto Parts and Team Tiger were distributed by drawing numbers. The evening was brought to a close with the showing of three great racing films from the S.A.A.C. library, courtesy of Rick and Collen Kopec. Thank you both, it was a pleasure having you with us.

Sunday morning, up early, get pictures, line up for the caravan to autocross, where did everybody go, got directions and found the way. No rain this year-ran the first two groups-it was great. Thanks to Keith Porter and the Andiano Snorts Car Club. (Notes Wally Swift and his Alpine are still the combo to beat.)

Dinner Sunday evening was relaxed and in some cases numb from all the activity of the weekend. Those who were staying over Sunday night ate in small groups of three to eight people enjoying the company of friends not to be seen for another year. The weather over the weekend was one plus and the other was the finale as 20-25 members took over the T.V. (48″ projected screen) alcove at the bar to watch the N.B.C. Sunday night movie “The Gum Ball Rally”.

Thanks again to all of you who worked so hard to make the weekend a success and to Rich Urban and Jeanne and Charlie Wainwright for covering all the loose ends and keeping things tied together.

Wherein an intrepid Tiger affectioadoe ventures south about 400 miles and encounters a large number of Tigers relaxing for an easy weekend.

Got a call from Joe Mazzei one day. Was informed that Tigers/Alpines East was holding its annual convention in Williamsburg and was there anything in my calendar that weekend. Are you kidding, Mazzei? Never been to Williamsburg before and I’ve always been impressed with those neat little buckets, ever since I saw Ronny Dykes make the GT350s work out at Riverside in 1966. He came verrrry close to winning that year.

From what I was, the weekend was pretty damn impressive. While in sheer numbers, there wasn’t what you would call a huge turnout, the enthusiasm that pervaded the entire event was intense. The weekend ran like a well-oiled 289, and from the swap meet to the concours, there appeared to be something for everyone. Even chili!

I tried to do my part by bringing along a few vintage films (spread the gospel, you know–Cobras, Shelbys, GT40s etc.) and although I didn’t have “the” Tiger film (it would have been neat to show, but having seen it, it honestly isn’t that good), the Shelby/Ford message was close enough. Saturday afternoon’s concours was handled in a very unique way–as far as clubs go. It is evident that there is a high level of interest in this area, because of all of the thought that has gone into the factoring of the classes Tigers/Alpines East appears to have found the perfect way of handling the problem: that are created by the very nature of a concours event.

All in all, I’d have to say that if you didn’t make it down to Williamsburg, you missed out on a neat and special time. Reading about it isn’t good enough! And you shouldn’t let it happen too often because you’ll be missing out on a piece of history. Believe it or not, groups like Tigers/ Alpines East are making it, now, and in ten or twenty years you’ll have two responses about things like this: I remember that club–they used to do all kinds of things!, or–I was there!

Williamsburg II is over and I wish to thank you and all the wonderful members I met for the many fine compliments and awards given me and my Alpine. The whole weekend was most enjoyable and not to be forgotten.

Genuine friendliness prevailed with all in attendance and nothing negative was heard. The whole show is something the club can be proud of in these times of discontent.

I, for one, know these shows don’t happen by themselves. Much planning must be done. The beautiful awards and arrangements we had reflected this. From what I saw I think our organization is in good hands and surely is deserving so. Keep the Sunbeams rolling. 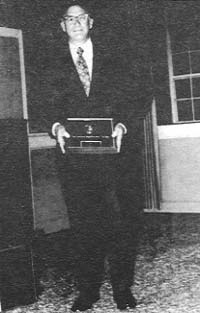 Ernest McCormick, left, was the winner of the Lord Rootes trophy, most desirable Alpine and first place in stock Alpine. He has promised us an article on his Alpine which he has owned since it was brand new.

Those of you who saw his Alpine at Williamsburg and at Smithville will agree with me that the tender, loving care it has received over the years is obvious.

The tremendous cooperation I received was appreciated, as this was my first time and I was quite green at running a concourse. I want to extend a hearty thank-you to Larry Bailor, who worked with me through the year trying to set up a fair and workable concourse and to Wally Swift and Larry Schroeder, who acted as advisers. I also want to thank the following Tiger and Alpine owners who put their heads on the chopping block, so to speak, by acting as judges. The following people, I felt did a super jobs George C Mathis, Sr. and George Mathis, Jr. of Kingston, N. C.; Bob Rhodes, Laurel, Md.; Tom Calvert, Severna Park, Md.; Scott Woerth, Christiana, Pa.; Bob Gaskill, Gainesville, Ga.; and Maurice DelPrado, West New York, N. J.

Everyone seemed to be pleased with the noon Concours and Chili Bash. The later time gave them time to prepare their cars. I think hats are off to the wives, as most of the cars would probably not have been ready without their help (especially mine).

The cars seem to be getting better each time I see them. There were 21 cars entered. They were six stock Tigers, six personalized Tigers, four modified Tigers, two stock Alpine and three modified Alpines.

Again, thanks to those who gave their time and knowledge to this event, and to everyone at United II for their cooperation and sportsmanship.