by John Logan in the May 2001 RootesReview:

The purpose of this paper is to describe a simple method to use in testing and analyzing vehicle cooling performance for those of you who want to improve your vehicle. Through the years, this procedure has been used to quickly analyze cooling problems in vehicles such as cars, trucks, off road machinery etc. and steer the engineers in their decision-making process.

The Engine Coolant Temperature In vs. Out (Engine DT) Methodology

Before you start road testing you must have a vehicle with a clean cooling system, a properly tuned engine and an open thermostat. You will need to get your hands on some thermocouples and accurate instrumentation to read them.

Here’s how it works. If a vehicle’s cooling system is fully optimized, it would cool under all expected driving conditions. The stabilized difference in Engine DT would be, as a reliable “rule of thumb”, 10 F°. In reality, the cooling system must be designed to meet the worst driving conditions, therefore it will be over designed in the other conditions and this “rule of thumb” will not apply. At the driving conditions where your car will not cool within your expectations of ambient temperatures, engine out temperature, vehicle speed, or idle time, then the following rules do apply.

A. If, at the problem driving condition, the difference of Engine DT exceeds 10 F° then the cause is predominantly a water flow problem. Coolant is flowing too slowly through the engine so there is more heat per unit volume transferred to the coolant but less total heat transferred to the radiator due to the low flow. Some items that can cause this are:

B. If the Engine DT is less than 10 F° than the problem is on the airside of the system. Things that may cause the problem are;

C. If the Engine DT is at or near 10 F° and the vehicle is not cooling then the total system has a problem on both the water and the air side. This often happens when the demands of the car are greater than originally intended when a larger engine is installed in a car without upgrading the cooling system.

As an example, the graph shows curves that illustrate this methodology. There are two sets of Engine DT curves for a 5.0L, 5 speed Tiger with two different cooling systems. The actual temperature during these tests was close to the 80° F but in this graph they are corrected to a 100° F day. The top, high temperature curves are a base line for a stock 1966 cooling system and the bottom set is for the same car with an improved cooling system. 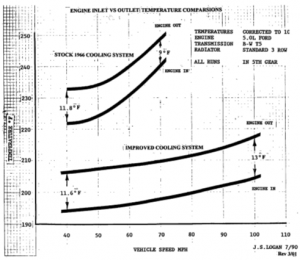 Note that in the top curves, there is an 11.8 F° DT at 40 MPH. This is above the “rule of thumb” so there is a water flow problem. When the road speed goes to 70 MPH, the DT drops to 9 F°, which is below the “rule of thumb”. This indicates that there is a problem on the air side of this car, and improvement in heat transfer area or airflow is required.

The conclusions to be drawn from these curves is that at 40 MPH, the car was lugging under high torque in fifth gear at 1100 RPM. The water flow from the pump was too low for the cooling that was required. At a high speed of 70 MPH more horsepower is required from the engine to push the car through the air and therefore more cooling is required but the airflow through this vehicle is proportionally less due to a high total air restriction through the radiator and engine compartment. This vehicle like other stock Tigers is speed sensitive.

This work led to the “Improved Cooling System” as shown by the lower curves. The design focused on improving the air side of the system by increasing radiator cooling area, blocking off holes around the radiator and lowering the total air restriction through the vehicle. The result was a large improvement in Engine DT at both high and low speeds. You can see by the curves that at 40 MPH the Tiger would run at 207° F at 40 MPH on a 100° F day with an 11.6 F° DT and it would run at 215° F at 100 MPH with a 13 F° DT. The differentials shown by these curves have no meaning according to the “Rule Of Thumb” because there was now no cooling problem.

Measure the temperatures using the average of two thermocouples per hose. The thermocouples can be easily slipped between the hose and the inlet outlet taking care that the bare twisted end is in the coolant stream and not touching the metal. Take readings with a cold engine and record the differences for use later as a correction factor. Replace any thermocouples that read more than 2° F from the rest of them.

Try to test on calm days. Run tests in both directions and average the results.

You only need to run tests at the driving conditions where you are having a problem, which for a Tiger is usually at idle or high speed. To extrapolate to a higher speed you can take measurements at another point or plot your results on the curve in this report and follow it. If you want to make a run at 100 MPH you will need a long stretch of police and traffic free highway.