A survey was made during United IX of Alpine and Tiger tachometer accuracy. Using calibration equipment traceable to National Bureau of Standards (Now NIST), a total of 24 Tachometers were scrutinized by Doug Pruitt of Frederick, MD. Car owners were asked to remove their tachs throughout the weekend so Doug would be kept busy, since he had been bored during the last several Uniteds. Someday when he gets his Tiger on the road, he can calibrate his own tach, too! What Doug found was this: All tachs had errors-some were gross. And most tachs had significant errors that are inappropriate for normal car operation. Since there are no published specifications on Tach accuracy, we must conclude our own based on liberal interpretation of available information, such as calibration points (….”) marked on the meter face by the manufacturer: +/- 50 RPM Tolerance@ 1500RPM, 4000 RPM for 5500 RPM and so and 100 respectfully for 7000 RPM Tach. This summary reflects data derived with the calibration standard at 2000 and 4000 RPM, since these are the most common points of interest. However, tachs in the Survey were checked at 1000 RPM increments up to the maximum indicated. The cumulative probability plot that follows provides an interesting summary of the survey. First, it shows the actual error of each tach checked. And second, based on a random sampling of the two dozen Alpine/Tiger tachs, indicates the probability of error of other tachs (yours) not checked. In essence, we can conclude that 50% (ave. based on a normal distribution) of the tach population will be 863 and 1004 RPM too high @ 2000 and 4000 RPM respectively. Or to make you more paranoid, 85% (from 10% to 95% probability) of the tach population will be above our liberal interpretation of factory tolerances. 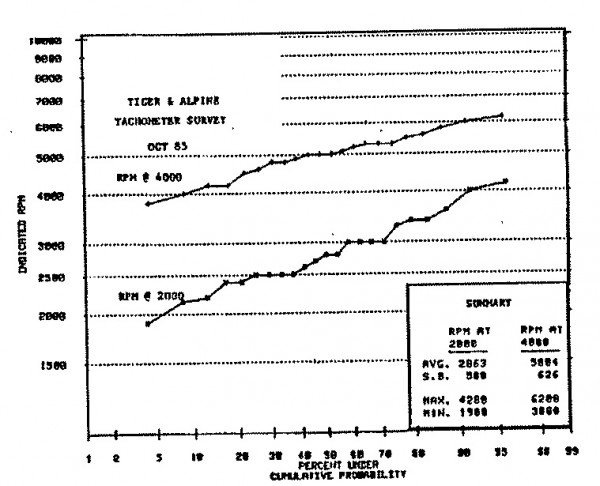 This is the second survey of this nature. The first survey was United VIII at Niagara Falls, NY, which yielded similar results. An out-growth of this survey is that our tachs are dwell sensitive. While most Alpine owners retain their original ignition systems, many Tiger owners do not. Tiger owners many times opt for the OEM Ford dual point, Accel, Mallory, etc. with and without dual points. Most times these bastard ( non stock) systems will not allow our tachs to work accurately, or for that matter, at all. There is no damage to the tach, so no need to worry. Depending on the ignition system used, merely exchanging another tach is all that is required to get working again. There are many other ways, too.

Changing the number of turns on the tach pickup loop, resistors, pulse shaping circuits, etc. The latter of which no known black box is available for resale on the open market that “works”. Doug Pruitt has threatened to make a “black box “for resale. Perhaps this public notice will get his and others attention who would be willing to work on the project. In summary: our tachs are extremely dwell sensitive and according to this survey, highly suspect. Solution: have your tach calibrated by a competent source and be on guard when using non­ stock ignition systems or contact Doug and demand he build black boxes.