by Ed Esslinger in the February 1997 Rootes Review

That’s the statement that caught my eye as I was looking through my latest Hemmings Motor News.
Among the claims were fast starts every time, unaffected by dirt, oil, or moisture, improved fuel mileage, elimination of minor tune- ups, higher voltage from your existing coil, improved timing accuracy, up to three times more spark plug life, 15 minute installation, an unusual 30- month warranty, and best of all, the entire systems fits in the distributor.
I called the 800 number and inquired if they had one to fit Sunbeam Alpine. As they had no listing for a Sunbeam, they referred me to the manufacturer. I contacted Pertronix and learned that they did have a unit for the Lucas distributor: part # LU 142. I ordered a unit for my Alpine from CBS Performance Automotive. Two days later it was in my Alpine. 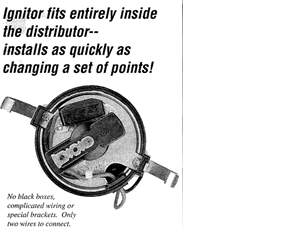 The only problem I had installing it was the hole for the hold down screw was a little small (quickly taken care of with a reamer).
After installing the unit, I hit the starter, and the engine started on the first try. I then set up my timing strobe to adjust timing (as they recommend). It was still spot on, and no adjustment to the distributor was needed. One thing I did notice was the consistency of the strobe light. Before I installed the ignitor, I noticed the strobe would misfire every so often, but not now.
Time for a test run. In the past, I had noticed that my tach would give a steady reading until I accelerated hard, then it would jump around until I let off. No more; it is now solid as a rock. Some of my problems could be due to a worn, 30-year-old distributor. As the ignitor is not gap sensitive, this doesn’t cause problems.
Time was approaching for the United in Orlando. I decided that I would take the Alpine (I put the removed points and condenser in my tool kit just in case). On the morning of departure, I filled the gas tank to the neck, set the odometer to 000 and headed for Orlando. After 278 miles, I noticed the gas gauge was still over 1/2 full. I began to doubt its accuracy, so I stopped and filled the tank to the neck again. It took only 8.2 gallons, which works out to 33.9 mpg. I don’t know if I can give credit to the ignitor for this, but I was getting around 27 mpg when I last checked it.
I made the trip to Orlando and back (840 miles) with absolutely no problem with the ignitor. I now have ignitors on three of my Sunbeams and highly recommend them.
I have no financial interest in this product. I only want to get this information out to our members. The good news: the advertised price for the ignitor is $79, but if you talk to Garry or Jim Lee at CBS Performance (800- 685-1492) and tell them you’re a member of TE/AE they will send you one for $69 postpaid. Ignitors are also available for the standard Ford distributor as well as the dual point type. The bad news: If you car is positive ground, it needs to be changed to negative ground for this product to work.