If you’re like me, and you want to know as much as possible about what’s happening with the systems in your car, then you have probably considered adding an extra gauge. I wanted to add a voltmeter, but where should it go? I didn’t want to hang it under the dashboard. I already had an ammeter, so the onl  spare hole in the panel was the clock opening, covered with the blockoff plate since the clock was not present. But, the hole was too large for the standard gauge size.

The solution was simple. The clock blockoff plate is made of two sections; a metal ring and a plastic disk. The disk is held in place by some little metal tabs. Carefully bend up the tabs, and the disk comes out.

Now you have a choice. The gauge body will fit through the clock ring, but the gauge’s trim ring won’t The easy way is to install the gauge is to drop it in through the ring, widen its U bracket and you’re done. I didn’t like the way it stuck out, so I chose to mount it to the ring from the rear. 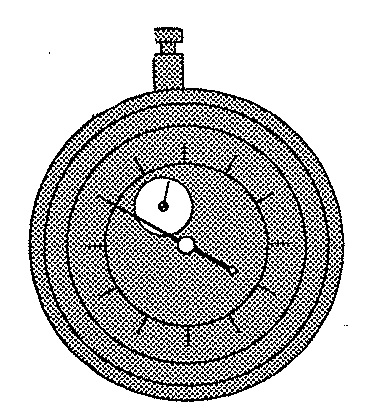 I bent the tabs that held the disk to the gauge in place behind the ring. They are not strong enough to do the job alone, so I used a “hot melt” glue gun to secure it I really globbed the stuff on, making a complete ring around the gauge and fully immersing the tabs. This glue sticks to itself well, but doesn’t do as good a job sticking to other things.

With the complete ring and the immersed tabs, it holds together well. But if I ever want to remove the gauge and replace the disk, it should all come off easily. To be cautious, I didn’t tighten the U-bracket nut too much.

With the ring and the gauge’s trim polished, the size difference is noticeable, but not remarkably so. It’s far less obvious than the front mounted option, and it certainly makes the panel look more complete. And the price is right.

Additional note: The Smiths voltmeter I used had been salvaged from a TR-6. The inner portion of its trim ring was painted black. This paint came off easily and the whole thing polished up nicely with some Simichrome. The pointer was white, so while things were apart, I used some Testors orange to make it match the other Tiger gauges. I didn’t try it, but a “black ring” gauge might look good behind the polished blockoff ring, also.