by Rex Funk in the May 1995 RootesReview:

Short diagonal lines on the drawings point to important identification features for each car. 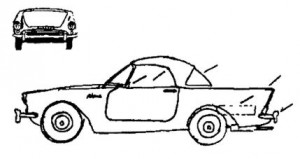 The first of the finned Alpines, this model was introduced in October, 1959 and produced until October, 1960. 11,904 were built, and most were exported to the USA The new Alpine set a trend for refinement in low cost British sports cars which was soon copied by the likes of Triumph, MG. And Austin Healey. The car used a modified Rootes sedan engine with an aluminum head and dual Zenith downdraft carbs. Optional hardtop, wire wheels, and overdrive were temptations. Roll-up windows, convenient soft top. and American styling influence made it popular in the USA.

The improved Series II featured a larger 1592 cc engine (still 3 main bearings). improved disc brakes, more angled seatbacks and firmer suspension. Its world wide racing record was the best of all the Alpines and it enjoyed a nearly 2-1/2 year production run totaling 19,956 cars. Factory race tuning parts spanning 3 stages of tune were offered and the Alpine became a popular club racer in the USA. The Harrington GT coupes were spin offs of the Series II.

The rarest production Alpine, the Series III was produced from March, 1963 to January, 1964 for a total of 5,863 units. It was a transitional model, incorporating many of the modifications of the later low fin cars such as roomier trunk, later hard top, tube type rear shocks, improved micro cell seats, and a vacuum brake booster. Both a GT model with only a hard top and a Sports Tourer model with soft top were offered. The 1592 cc engine was de-tuned in the GT for smoothness.

This was the first of the low fin Alpines, and was produced from January, 1964 to September, 1965 for a total production of 12,406. Changes included a single bar grille, ball joint front suspension, Solex 2 bbl. carburetor, hinged gas filler cap, and other cosmetic features. An automatic transmission was optional, and an all synchromesh transmission was introduced halfway through the production run. Both GT and Sports Tourer versions were offered. Series IV bodies where used to make Tiger Mk I cars.

The Series V made from September, 1965 to January, 1968 to was the last of the Alpine roadsters. A 1725 cc engine with a 5 main bearing crankshaft and dual Zenith / Stromberg carburetors were the main changes, and enhanced performance over the Series IV. The convertible top was stowed under a vinyl cover, rather than the metal compartment. Series V bodies were used for the Tiger Mark Ia and II.