by John Logan Sr. in the December 1997 RootesReview

If making a major improvement in the driving character of your Tiger takes precedence over originality, consider replacing the Ford four speed top loader with the Borg Warner overdrive T5 five-speed transmission from a 5.0 L Mustang.

What are the Advantages?

If for instance, your Tiger has a 2.88 rear end, your engine is probably turning around 3000RPM At 70 MPH. Using a T-5 with a .68 overdrive your engine will turn approx. 2000RPM. The slower engine RPM means improved engine and accessory life, considerably less powertrain noise, better fuel consumption and somewhat better highway cooling.

The T-5s have either a 3.35 or 2.95 first gear ratio verses the Top Loaders with a 2.78 for the wide ratio and a 2.32 for the close ratio. If you replace the close ratio Top Loader with the wide ratio T-5 you will gain a 44% increase in low gear torque. This improvement not only gives you smoother launches, it helps when you’re trying to blow the doors off a Corvette.

The internal rail shift is a major improvement over the external gate and linkage of the Top-Loader.

I’m not sure of the exact difference, but because of the aluminum case and smaller internal components the T-5 is at least 15 lb. lighter than the top loader.

Figure 1 is a listing of transmission data. I have included the Top Loaders, which includes the SHROD 4 speed overdrive transmission used in the 1979-1983 Mustangs, the 2.3L 4 cyl. T-5 and the Tremec five speed transmissions for comparison. The T-5 used with the 2.3L 4 cylinder engines is not recommended because of it’s low torque rating and the poor gear spacing for a V8. In 1977-78 there was a overdrive Top-Loader used in the Granada and Monarch. I have no data on it, but third gear was converted to the overdrive. It and the SROD, which also has an overdrive, are simple bolt-in replacements for the Tiger Top-Loader. However, both of these transmissions have the disadvantage of large ratio steps. If you are planning to install a high torque killer motor and driving it hard, you may want to consider the Tremec transmission. It will bolt to the original Tiger flywheel housing. It is however larger than the T-5 and would require some widening of the rear of the transmission tunnel and modification to the body “X” member for the rear mount. For a more complete list of T-5 transmission data, see the May 1997 issue of “Super Ford” magazine. 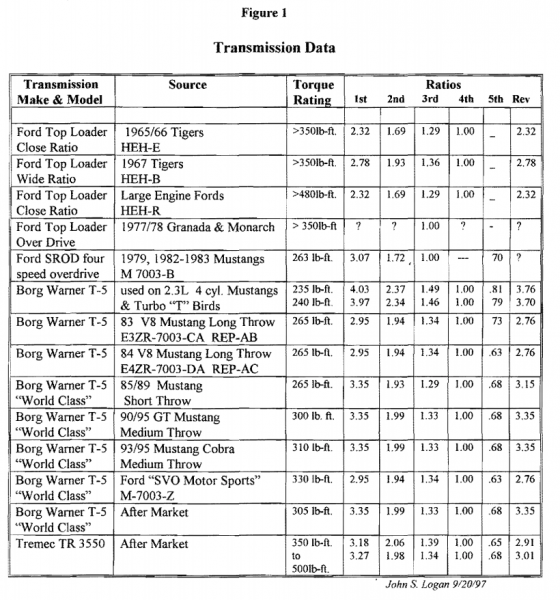 How do you install the T-5?

There are two basic methods. One is to use a plate that will adapt the T-5 to either the 260 five bolt or 289 and 302 six bolt housings. An American Motors 1980’s Concord tail shaft housing and output shaft can be used on the Mustang T-5 to move the shift lever forward and allow rotation of the transmission. With the combination of the Concord tail shaft and the rotation, the shift lever can be near its original position. The Mustang shift lever and the Tiger speedometer drive must be replaced. When the transmission is rotated, a stand pipe must be added to the oil fill hole to maintain the proper oil level and there may be some oil leakage from the speedometer drive. John Webber has made this installation and can provide you with additional information.

If you are willing to move the shift lever rearward and to the top of the tunnel, the installation that I developed and the one that I will describe here will allow you to use:

In payment for all this good news, you will be required to move the center of the seat riser crossmember rearward 2 inches to clear the T-5 shift tower.

Moving the center of the seat riser crossmember

Some Mustang T5 conversions have been made by eliminating the center of the seat riser cross member. I feel that the continuity of the cross member is required to maintain torsional stiffness and reduce mid-car shake. Open cars need all the help that’s available. This view is looking from the passenger’s position. 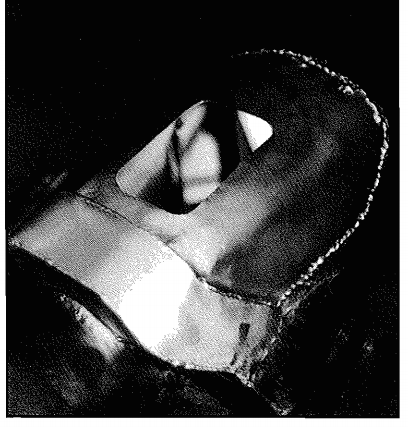 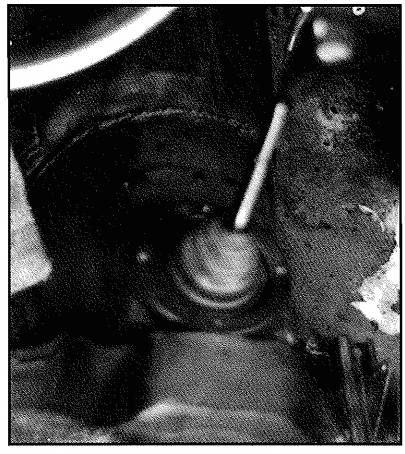 A new tunnel piece, shown in the next picture,  is cut to fill in the original shift lever hole and lengthen the tunnel so that it can be welded to the new cross member section. The tunnel must be raised about 1 inch on a transverse line at the center to clear the top of the T5 before this piece is added. An access is required that is large enough to install the shift tower cap and pivot assembly after the powertrain is installed. A plate attached with sheet metal screws, shown in the first picture, covers the hole and provides a surface to screw on the standard Tiger shift boot. I made all of the new sections out of thin cardboard first and used the pieces as templates. This is what I call my CAD System, for Cardboard Aided Design.

The clutch throw-out lever on the T-5 Mustang flywheel housing disengages the clutch by moving forward, which is opposite the original Tiger. This action is accomplished by a slave cylinder bolted to the rear face of the flywheel housing that actuates the lever through a connecting rod. 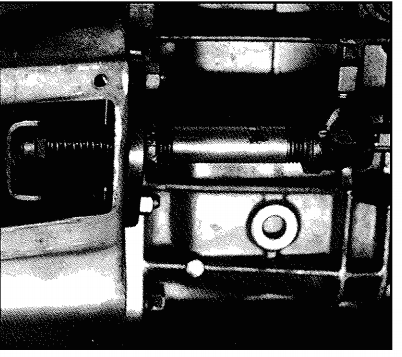 The spring shown in this picture provides a required 20 to 30lb. preload on the constant running late model Ford throw-out bearing and eliminates the backlash in the system. The end of the lever is shortened so that the rectangular hole in the housing can be covered with a plate. As you can see, this is a very clean and simple design. 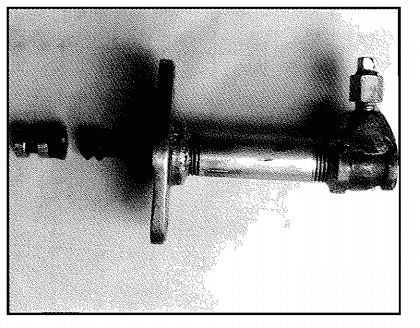 The design requires a slave cylinder with a 3/8 inch piston and a 1-l/4 inch stroke to match the Tiger master cylinder. Since I couldn’t find one with these dimensions, I made one from a piece of water pipe with a modified floor flange on one end and an end cap with a welded bleed boss on the other. The pipe is bored and honed and a rubber piston seal from a 3/8 inch Plymouth Horizon rear brake rebuild kit is used. 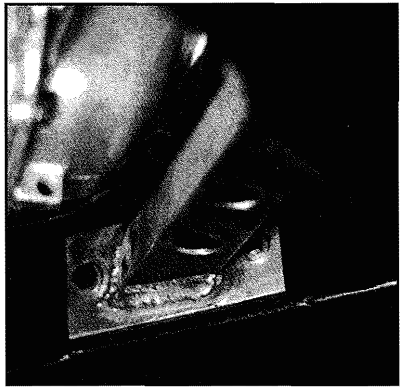 A new transmission rear mount cross member is required to clear the T-5 overdrive unit. To provide the room, the original isolator is bolted on top of the crossmember rather than on a cantilever bracket. The crossmember can be made from 2×2 inch aluminum or steel. The transmission rear mounting surface moves rearward on the same plane as the Top Loader to maintain the same mounting and output shaft height.

The Stock T-5 shift lever can be used by removing the rubber isolator and rotating the lever 180 degrees. There are shorter after market levers and short throw shift towers available that work great with the T-5. 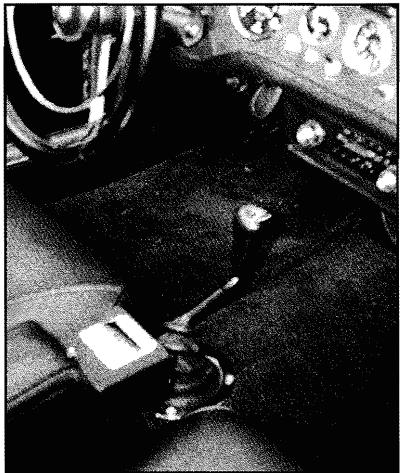 Here is some good news! You would think after all of these modification the drive shaft would need modification, but it fits right in. The T-5 used in Mustangs was originally designed to replace the Top Loader so the spline, output bearing diameter and location are the same.

Other Changes and Comments

I have given you this description so you ‘ll have some idea of what’s required. If you are ready to make the change and want more of the details contact me and I’ll give you all the help I can.

Afterthoughts on Installing a 5 Speed in a Tiger

by Chuck Ingram in the April 1998 RootesReview

In the December RootesReview, there was an article on installing a five speed in the Tiger. I enjoyed the well written article, but there was one part I know only too well by now. The part about the flywheel and engine balance should have been at the start with a big heading: “Warning – read first” and repeated.

This was one of my problems as well as some other concerns. I unwittingly purchased the whole works – flywheel back. The flywheel, however, can be balanced. As to clutch activation, it was interesting to see another way of doing more of the same thing. I have used a Neal Hydraulics pull type slave cylinder in the ’62 for 16 years. This proves its reliability. On my Tiger it is mounted by a bolt on the motor mount and a cable and clevis. A friend removed the pivot from the old bell housing and mounted it on the newer bell housing. Using the old arm, he was able to use the original Tiger slave cylinder. This also works well on his Tiger.