originally published as Because Three Won’t Fit; by Jim Morrison in the April 2000 RootesReview:

When I started the restoration of my black 1966 MklA Tiger in 1992, I wanted to have something special under the hood … dual four-barrel carburetors. I had seen two other Tigers with dual quads and had to have one myself. My theory was that something worth doing was worth over-doing. A requirement was that they fit under the stock hood, with air cleaners, without any scoop. The car was disassembled when I purchased it from John Webber. So, with no engine in it, measurements were difficult. I happened to remember an old CAT article about dual quads that said that the Offenhauser dual quad manifold was the lowest available for the small block Ford and would clear the stock hood. I found one at a swap meet and we were off!

The Offenhauser manifold is set up to mate to the 4GC Rochester carburetor bolt pattern. Offenhauser sells adapter plates (that converts that bolt pattern to a Holley/Edelbrock bolt pattern) that bolt right on to the manifold. I was not (and still am not) a fan of Holley carbs so I went with 500 cfm Edelbrocks (#1404). The combined 1000 cfm is way too much for a 302 small block Ford, even with the cam, Dart heads and headers, but this was more for looks than optimizing performance. I chose the mechanical secondary model Edelbrocks, as I like the positive control of mechanical secondaries! I used the out-of-the-box jetting and needle settings. It may be a little on the rich side but it works quite well. 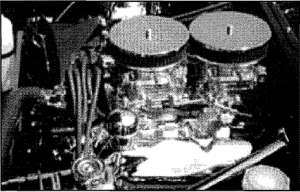 All my measurements told me that the rear carb was going to hit the triangular cross section brace that runs along the firewall. There was only 1/4 to 3/8 inch of interference but the brace had to go. I had the body man take off the brace in the area between the two mounts for the struts that go to each fender. This has caused no problem with structural rigidity.

I did not want to depend on the stock fuel pump being able to put out the pressure and flow needed by the two carburetors so I installed a Mallory fuel pump in the stock location under the panel behind the passenger’s seat. It turned out that the fuel pressure was above what the Edelbrocks wanted so I had to install a fuel pressure regulator down by the fuel pump to regulate the pressure to about 4.5 – 5 psi. I used braided stainless fuel lines from the pump/regulator forward, installing a fuel block under the car to split the single fuel line out of the regulator into two separate lines … one for each carburetor.

I found some 6 1/2 inch diameter, 1 1/4 inch high round air cleaners and have replaced the elements with K&N filters. They appear to flow enough air, even at high rpm.

To operate both carbs, I needed a new linkage and throttle cable. I found an Edelbrock dual quad linkage (#7094) that had two installation options. One method operates the primaries on both carburetors simultaneously and the other operates them progressively. I tried setting up the linkage both ways and preferred the mode where both primaries open simultaneously. It gave it more throttle response. I looked at a number of throttle cable options, finally settling on the Lokar cable. It is a stainless steel cable and housing, used by hot rodders, that can be cut to length and worked out perfectly. I used dual return springs on both carburetors for safety. I ran the PCV hose off of the rear carburetor and the vacuum for the brake booster connects to the rear of the manifold.

I am not too interested in the gas mileage of this beast, but when we travel on highway trips, I do check it. We about 14 mpg on the highway (70 mph at 3800 rpm … low profile tires and 3:31 rear end!). If I had to do it all over again, I absolutely would do the dual quads again. The car gets so much attention! When asked why I put two four-barrel carburetors on my Tiger, I smile and say, “Because three won’t fit.”