One hundred and five attendees and 40 Rootes vehicles plus other cars made it up to the top of Lower Michigan for the TE/AE 2014 XXXIII United, and it was loaded with activities. During the event, we had a Car Cruise, a Boat Cruise, Lunches and Dinners, a Concours, Meetings, an Autocross, a Sunday Outing, a Technical Session, a great Hospitality Room, a Parts Room and, of course, the Banquet.

On Friday, after a trip to the well stocked Hospitality room, the 104 mile car cruise started with our first stops led by John Logan Jr. and Dick Collie to a tour of the Van Dam Custom Boats and the Classic Instruments factory.

Our next stop was at the historic Little Traverse Bay Country Club for lunch. The Country Club had a great buffet spread.

To end the day, we had dinner on our own, followed by an evening boat cruise for seventy two attendees around Lake Charlevoix. Then to the Hospitality room and Parts room to renew friendships, discuss cars and parts and have some snacks and drink.

The Concours on Saturday was in a large tree-lined park along Lake Charlevoix in Boyne City. There were about 40 judged and non- judged Rootes vehicles on display.

Bob Sharkey ran the Concours and announced the following awards at the banquet:

Diamond in the Rough:

Longest Distance Driven to the United in a Rootes Vehicle:

The “Shoes” for Most Problems:

Pam Jeffers conducted a Board Meeting and the General Membership Meeting. The highlight was a proposal presented by Eric Gibeaut, Jean and Bob Webb, and Doug Jennings for having the 2015 United in Dayton Ohio. There were also the Parking Lot Meetings.

Barry Schonberger ran another of his outstanding Autocross events. The Autocross was held in one of the Boyne Mountain’s parking lots so there was no long drive to get there. Barry had 10 cars that signed up, but only 9 ran as one driver could not get a helmet to fit. There was a lot of time so each
driver got ten laps to hone their techniques.

Barry announced the following awards at the banquet:

Laurie Logan and Mary Lara led the way to the City of Charlevoix in Laurie’s 54 Alpine with at least two other Sunbeams and 22 members. They started off with lunch at the historic Weather Vane Restaurant with views of boats passing between Round Lake and Lake Michigan. After a fantastic lunch it was off to shopping in Charlevoix’s many unique shops along its main street. Some people did a short self-guided tour of the Mushroom houses designed by Earl Young. A good time was had by all.

The Banquet was held at the Boyne Mountain Resort so no transportation was required. They served a Buffet which included an outstanding roast beef and Michigan Great Lakes white fish. Approximately 30 door prizes were awarded, and in addition to the Concours and Autocross awards, the following Special Club Awards were announced by Pam Jeffers. 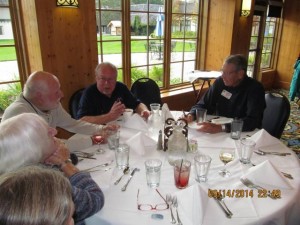 The banquet ended at a record 9:15 PM and most members headed for the Hospitality and Parts Rooms.

The following members contributed to the United to make it a success: