Recently it became desirable to mount a radar detector in my Alpine. The only reasonable place was on top of the dash pad. Drilling any holes was out of the question. I was afraid to use the manufacturer’s suggested self stick Velcro on the delicate dash pad, and besides, it would not stick once the dash was Armor alled.

As a solution, I constructed a bracket that slides over and latches around the curved portion of the dash pad. A hole catches on one of the tonneau cover snap posts to lock it in place. An additional hole is provided to latch over the other tonneau snap post if you want to drive with half the tonneau up.

The surfaces, which touch the vinyl dash, are padded with felt. My detector (an Escort) looks out through one of the wiper blades when mounted as shown. Fortunately, the blades were long ago changed to plastic to prevent windshield scratches. Plastic blades won’t block the microwaves as metal might.

Dash pads seem to vary from car to car, so you should measure your own. I constructed my bracket from .05″ thick 5052 aluminum. The curved section was formed by hand 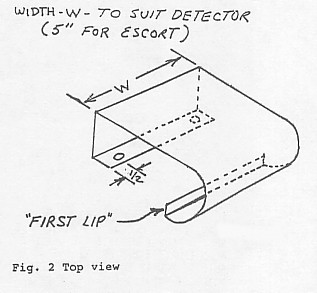 bending around a slotted piece of 1 7/8″ OD iron pipe, after making the first lip.

The entire bracket is painted with Krylon ultra flat black. Felt is then secured with contact cement to all surfaces that touch vinyl. The front holes were measured and drilled after the rest of the bracket was complete to make a tight “snap” fit.

When securing the radar detector to the bracket, be sure that no rivets or bolts go through any area that would touch the vinyl. For the Escort, this involved adding an extra rivet hole in its plastic bracket midway, between the two existing ones. This bracket provides a secure radar detector mount without defacing the dash pad. In addition, it is quickly and easily removed, leaving no trace of the radar detector for snooping eyes.

[Ed note: This might just work for a much newer GPS mount as well!]