Shelby had built his prototype Tiger so well that little was changed when it went into production. Even with extensive testing and drubbing of all sorts, it showed itself to be amazingly reliable and smooth. The production Tigers were equally gifted, making them formidable foes on any kind of race track, rally, hill climb or street.

Once introduced to the race tracks of Europe and the U.S., the Tiger proved to be so successful that brute performance became associated with its reputation. With the Ford 260cid engine being almost infinitely modifiable, one could choose street or track performance to whatever stage was desired.

Since Shelby was known to tweak his small blocks to perfection, it was certain that his Cobra magic would rub off to make the Tiger into a beast to be respected far and wide. Although the Tiger was not another Cobra, designed to stomp the racing world, it could go fast and it handled nicely.

When fitted with the proper equipment, the Tiger became a true racer and could dominate an event while putting some of Europe’s finest to shame. This ‘proper equipment’ was available from the beginning for the Tiger and was designated as LAT meaning Los Angeles Tiger. The options came from existing Ford parts or, were especially designed for the Tiger and were put into kits designated as LAT-1 through LAT-82. Some other items were ordered as individual part numbers. Not all LAT options were performance items, a few being articles of clothing and other accessories.

All the LAT option kits were originally put together by Shelby, lan Garrad and their associates in Los Angeles, thus the designation LAT. Record keeping of the kits by LAT numbers was easy and translated smoothly into sales literature. The kits were distributed to dealers from the Rootes Parts Department with installation at the Rootes Main Service Depot on Long Island, New York or at the West Coast Warehouse in Long Beach, California. The kits were also available through dealers to Tiger owners who wished to up the growl of their cats.

It should be noted that the LAT options fit the Mk II 289cid Tigers as well as the Mk I and lA although they were introduced for the 260cid engine. Since the 289cid Tigers were in production only a short time, no LAT kits were developed expressly for them.

In reality, the 260cid engine manufactured after about October, 1965 was a special item manufactured through Ford’s Industrial Division to Rootes’ specifications and was not the standard Fairlane 260. The Tiger 260 was essentially the 289 bored to 260cid. The external difference between the real 260 and the special 260 is the number of freeze plugs on each side of the block. The 260 has two and the special has three.

The LAT options were of two types, performance and accessory. They are as follows:

Other items ordered by part number were:

Various LAT and special order options were put into kits as follows:

The LAT-1 kit of the Edelbrock F4B aluminum hi-riser and small Holley R-1848-b 4-bbl rated at 465 cfm was advertised to give a 30 hp boost over stock. A larger capacity Holley 4-bbl (C4AF- 9510-DA) was available as the LAT-39 and was advised to be a competition item. This 4-bbl was listed to have huge 1.687″ venturies which appears to be the same type and size as the Holley used on the ’66 427-410 hp engine. An intermediate 4-bbl, the Holley R-3259-AS rated at 715 cfm was part of the 245 bhp Tiger when the LAT-1 and LAT-20 kits were ordered as original equipment. This carb has venturies of 1.438″ and is the same type as used on the 1966 306 hp Shelby engine. Note that the LAT-20 cam is identical to the HiPo 271 and changed the max torque from 2581b/ft to 3601b/ft while shifting the red-line from 5000 to 6000 rpm. Advertised top speed with the 2.88:1 gears was listed as ‘about 165 miles per hour.’ All this, consisting of the LAT-1 and LAT-20 kits, comprised what was called the Stage 1 Tuning Kit and sold for a mere $250. Should the Tiger owner/buyer wish more modest power, the LAT-3 kit could be ordered; consisting of the small 4 bbl and a special intake having the word ‘Tiger’ cast into it. This intake carried the part number C4SA9421 and was the lo-riser. This option gave a 20 hp boost and cost $122. For a limited time, a similar ‘Tiger’ hi-rise intake was available (very rare indeed). When these were sold out, the hi-rise intake was the Edelbrock F4B which was of two types: the early ones had 4 intake ports while the later ones had two oblong ports. 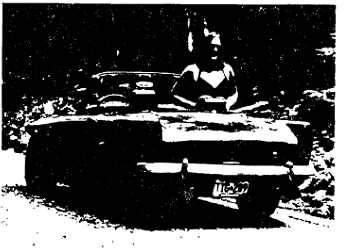 Mike Shenker’s Ontario, Canada – based Mark II Tiger has a unique license plate. While not an original LAT option offered on the car, Mike’s girlfriend,

To dress up the Tiger to dazzle any beholder, the LAT- 2 ‘Engine Dress-up Kit‘ was offered at only $69 and boasted cast aluminum valve covers of the Cobra type that told the world that this was a Tiger, ‘Powered by Ford.’ Chrome plated oil dipstick, air cleaner top plate, radiator cap and oil filler cap completed the kit. Just the cast valve covers. LAT -8, were $39.30. To add to the performance look and to take care of more power to the ground were the LAT-9 and LAT-70 alloy wheels. The LAT -9 wheels were $42.25 each and the LAT- 70 wheels were $48 each. Fender flares, LAT -44 and LAT -45, allowed the use of wider tires such as the Safety Hub Kit. The LAT-4 oil pan was like the Cobra cast aluminum variety but read ‘Tiger’ rather than ‘Cobra.’ It was $89.45. The LAT-7 cast steel scatter shield was approved by NHRA, AHRA and SCCA for competition use and was $95.50. The Traction Master Kit (LAT-5) was $42.45 and was absolutely necessary.

The LAT- 50 positraction kit was $80 and gave the buyer a choice of final drive gearing. The following chart illustrates the performance available to 6,000 rpm for these gear sets:

It was this sort of gearing (4.55:1) with a tweaked up 260cid that allowed Gordon Chittenden to pilot the Larry Reed Sports Car Tiger to become the AHRA National Record holder for the 1/4-mile with stats like 108.0 mph at 12.95 sec. The classes available to the Tiger depended on how it was equipped and were XF/A (Foreign Sports) and XL or XH (both American Sports- since it was Ford powered) with XL for the stock Tiger and XH for the LAT Stage 1.

Les Ritchey prepared Gordon’s noble cat and all was good enough to nail down its class World Championship for two years. That’s something to purr about. On the tracks the story was the same, with class wins everywhere (more on this later) and it was made possible largely because the Tiger LAT option list made it a roll-your-own performance machine for any event.

From sleek street machine to thundering beast on the track was available to the Tiger buyer not only in the form of LAT options and kits but also factory preparations by the Rootes Group Competition Department. Stages I, II and Ill and Chassis Preparation was on tap. Stage I (not to confused with the Stage 1 Tuning Kit) gave a 20 hp boost consisting of the ‘Tiger’ to-riser and small4bbl. Stage II completed the 245bhp set-up, consisting of the LAT-1 and LAT-20 with some other minor mods. Stage Ill involved all preparation necessary for competition and was a complete convers1on of the engine inside and out to meet the needs of racing With the Chassis Preparation option, the Tiger was completely transformed into a B-Production winner. 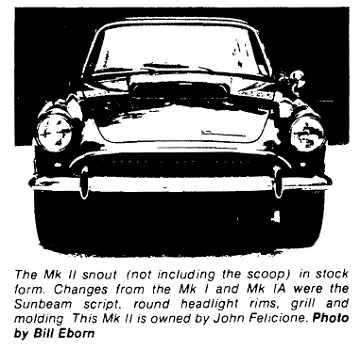 Sources for this article are: