The primary wires of the ignition system are all the small diameter wires from the ignition switch to the inside of the distributor. All of these wires and connectors, especially from the ballast resistor to the distributor, need to be inspected for cracked insulation, contamination, corrosion or other problems. You want to eliminate any parts that might be leaking voltage or that might be creating high resistance.

Anywhere you can reduce the electrical resistance in the primary wires will help performance. Remember, in the run position your ignition is not running at 12v; it’s most likely 9v due to the ballast resistor. You need to keep as many electrons flowing inside the ignition system as possible. 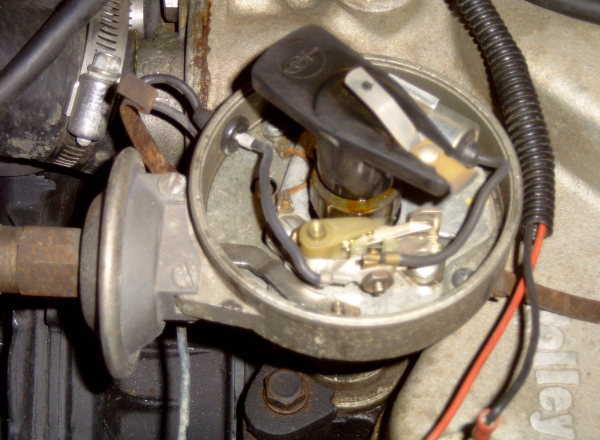 Many manufactures used fabric coated wires inside the distributor; these work fine until the fabric becomes contaminated and damp; they begin to short, giving poor performance. They can also short out resulting in no spark and no start. These same kinds of problems will happen with cracked plastic insulation or oil contaminated wires.

I have fixed several distributors by replacing those fabric coated wire with modern plastic coated wire and soldering the connectors to the wire. The distributors I fixed were mainly Japanese cars, 70’s Hondas and Datsuns. Each car responded with better performance and better fuel mileage.

The point is to check all the primary wires for any problems, and fix them by whatever means you think is appropriate. This is where your VOM meter is your friend, used to check resistance, or voltage drops if you like. It is also a good idea to check all the ignition ground paths; again good ground paths means less resistance which means better performance.

Now that I have said all that, the easiest way to eliminate problems inside the distributor is to install a Pertronix unit or similar to eliminate the points, but you should still check the rest the primary system for any resistance problems.

French
/** asynchronous lucky orange tracking script will not block your page from loading. **/