The 7th annual Brits on the Lake car show took place on Sunday August 9 in Port Perry, Ontario, a small town on Lake Scugog about one hour northeast of Toronto. This year, Mother Nature cooperated with a spectacular sunny warm day, so a record turnout of over 300 British cars was expected. While the numbers aren’t in yet, I am sure the number was passed. There were so many spectators on the street I couldn’t really take an overall picture that truly captured the moment. There were three live bands playing along the venue and in the park, entertainment for the kiddies, and a great variety of cars to view, including a few race cars. We even ran into a couple of previous Sunbeam owners like Thom Sloley and Peter Gilbert to catch up on news.

Allan Weller, who owns an Alpine race car, and a Series 3 Alpine, was there with his beautiful extremely low mile-age Morris Minor 1000, and Paul Tonizzo rested his Tiger after driving to the TE/AE United, and brought his beautiful right-hand drive MGA.

Rootes was well represented with nine cars, five Tigers, an Alpine, a Rapier, an Imp and a Hillman Husky. Has anyone seen a Husky live before? It was right-hand drive, and I am not sure if they ever sold them in Canada. In keeping with her theme at the TE/AE United, Cathy (my wife) kept her Mediterranean Blue toenails painted for the event.

Many of the Sunbeam owners gathered at the pub for lunch (how unusual!) to look over the lake, enjoy the shaded patio, and rest their feet from the stroll up and down the main street and side streets. While we were at the pub, the motorcycle ride for Sick Kids Hospital landed in town. I’ve never seen 1,000 motorcycles come in at one time! Needless to say, Port Perry became one crowded place for the afternoon. 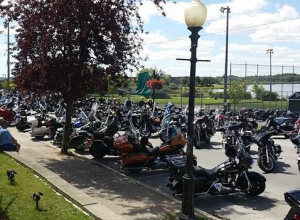 This is a one of the largest annual gatherings of British cars in Ontario, and I would venture to guess that only the British Car Day at Bronte Park every September, with about 1,200 cars, beats it. It’ s definitely worth adding to your calendar for 2016.