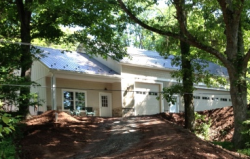 Here’s the story of this year’s event:

In 1973, Joe’s first 1967 Series V Sunbeam Alpine was finally in great* shape mechanically. Unfortunately it was helped to an early grave by a tractor trailer in Boston. The truck took a corner a bit too tightly, running over the front driver’s side quarter panel—with the driver at the wheel. No humans were harmed in the making of that mangled steel mess.

Missing the Alpine and long before Ebay, the Boston Globe want-ads were scoured daily for another one. In spring of 1974 Joe bought his second Series V and drove it from Boston to Bethlehem, PA, for some end-of-the-year graduation celebration for the future Mrs. Joe.

We were in our twenties. It was spring. The top was down. It was fun. But there was a terrible grumbling coming from the back end. It was determined that the car needed serious work. (The kicker? That car was only SEVEN years old!)

It was driven to a friend’s barn where, while DWP (driven when parked), it quickly became home to a family (or two) of mice. The friend topped up the brake reservoir with brake fluid–not Girling–turning the seals to mush.*

So in 1976, with the barn up for sale, the car was towed from north of Bethlehem to Baltimore where it took up residence in a VERY SMALL (10×20’) garage to be worked on. The drive shaft was a gnarled mess and the transmission needed attention. Both were removed for repair.

Of course, you would know that the transmission holds the engine in place. So one end of a chain was wrapped around the engine and the other around rafters in the garage.

Work on the transmission was progressing on the floor in the basement next to the furnace. A screw driver held needle bearings in place, until a furnace repairman needed that screwdriver. SPROING! About three quarters of them disappeared. And that was the end of work on that car.

Time passed. Children grew up. The hulk hung in the garage for TWENTY FIVE YEARS! Assorted parts were laid out in the basement on shelves. (Yes, Mrs. Joe is very understanding!)

Other garages were rented for other cars. Rafters in the little garage were reconfigured to fit a lift and a second Alpine (one on top of the other – another good story). In fairness, the engine was worked on, machined by an expert, and rebuilt. An engine stand was purchased, and the whole thing was covered with plastic.

In order to preserve marital harmony and keep the newly-home engineer from being in the face of Mrs. Joe, it was determined that a move to house with a perfect garage was required.

Perfect garages rarely come with perfect houses. So they moved to the perfect house with plenty of space to build the TajMaGarage. The engineless Sunbeam was towed again to new digs along with a couple of other LBC friends–some drove, others were also towed.

So now they own their very own BARN FIND!

Mrs. Joe knows that guys like to poke around other guys’ cars and say what they think the owner should do, should have or should not have done. So when Tiger Tom Ehrhart suggested that they host the 40th Annual B.A.S.H. (Bring A Sunbeam Here) at their place slightly north of Harrisburg, PA, Mrs. Joe was pretty sure that kind of discussion would be a great activity to add to the rest: showing off of other cars, plus food, valve cover races and a driving tour/clue rally through the mountains of Dauphin County.

High points of the day:

Food, rally, valve cover racing, oohhs and ahhs over cars.
Prizes.
Other stuff yet to be determined
Full details of the event as they evolve as well as registration forms are here.